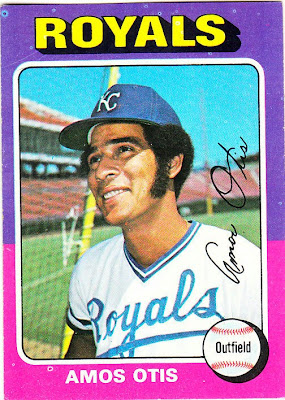 Card fact: The last three purple-pink bordered cards have been of players with a card number ending in a zero. Reggie Smith, Nolan Ryan and Amos Otis.

What I thought about this card then: I didn't see it. The first card of Otis that I saw was his 1976 card. I associate that card instantly with my friend Jeff, who was from Kansas. His family moved to New York and it was my first knowledge of a Royals fan.

Otis was Jeff's favorite player and he raved about him the way I saw no one else do unless they were a Yankee fan. I wondered what a strange world it would be to live in an area where the majority of people were rabid Royals fans (keep in mind, the Royals were good every year then).

What I think about this card now: I like the wide view of the ballpark in the background. ... oh, and the sideburns.

Other stuff: Otis was a central part of the great Royals teams of the late 1970s. He manned center field and received three gold gloves with his easygoing fielding manner that often included the now-standard one-handed catch.

Otis was acquired from the Mets in a deal for Joe Foy that proved to be a horrible trade for New York. Otis proceeded to make the All-Star team four straight years. He finished fourth in the MVP voting in 1978, and hit over .400 against the Yankees in the American League Championship Series.

In 1980, Otis hit over .400 again when the Royals faced the Phillies in the World Series. Otis played 14 of his 17 seasons with the Royals. He ended his career in 1984 with the Pirates. 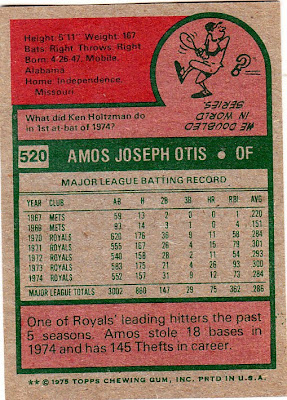 Back facts: Why in the world would you capitalize "thefts"?

Other blog stuff: Former Twins and Cubs player Jacque Jones (whatever happened to him?) was born on this date in 1975.
Posted by night owl at 12:35 AM

That's the card I was waiting for from the checklist post. I have a really rough copy of that one. The blue sky, the smile, the sideburns and the sideways auto all make a great card. As for the capitaliztion of Thefts, I'm guessing whoever typed that up had his finger on the shift key for the numbers and didn't take it off in time to get a lower case T. Just a guess.
The last thing I saw on Jones, he was with Minnesota again, but that was in 2010 and he was in the minors.

Missed a birthday by a day :-D
Love the auto.

AO played for the Pirates? I didn't realize that.

Right now, his '73 card is my most sought after Diamond Giveaway card.

I'm working my way through this blog and really enjoying it! I'm surprised that there was a picture taken at then-Royals Stadium (I'm 99% sure that's where AO is here).