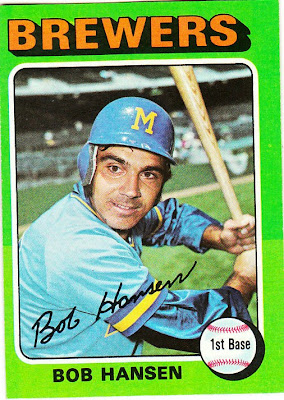 What I thought about this card then: Never saw it. Never heard of the man.

What I think about this card now: Hansen has a vaguely maniacal look about him even though a more rational person would pass it off as enthusiasm combined with a sweaty brow. It's quite a memorable card for your only card.

Other stuff: Hansen was a pinch-hitter and first baseman for the Brewers in 1974 and 1976. He was drafted by the Seattle Pilots in 1969. After spending several years in the minors, he finally came up with Milwaukee in '74 and contributed a .295 average in 88 at-bats. 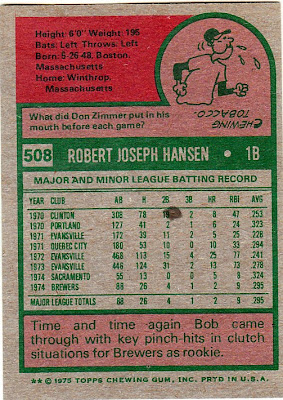 Back facts: It looks like Don Zimmer slobbered some tobacco juice on the back of this card.

What an odd cartoon. Zimmer wasn't the only one who chewed tobacco in the majors. Granted, Zim usually looked like he had an excess amount in his mouth.

The bio reads like Topps is straining for words in order to fill space.

Other blog stuff: On this date in 1980, the Kansas City Royals fielded the first "Q" battery. Dan Quisenberry pitched and Jamie Quirk caught.
Posted by night owl at 2:31 AM

I'd say that's a give-up by Topps on the cartoon and the write-up. I'd say Bob didn't do too shabby for only having one card. At least it's somewhat memorable.

As a dedicated Quirk collector, I approve of your "other blog" trivia! That's very cool.

Hansen had the experience of playing for probably the most offensive producing professional baseball teams of all time; 1974 Sacramento Solons, 305 hrs by virture of playing in football stadium with 233 feet down to line to left field. With the Solons he was averaging 1 hr every 10 AB so who know what he would have done if he wasn't called up for most 74.
Of course this runs both ways, for the Solon team ERA was 6.70.

Neverthe less he led the Solons in hrs. next season with 29, on a team that hit 197.

He looks a bit like Keith Moon to me.

That is quite an expression, isn't it? I've got Bob and some other crazy-looking dudes you might appreciate here: