Card fact: This is Gary Sutherland's debut card as a Detroit Tiger. He skipped around a lot, but he had his best success with the Tigers.

What I thought about this card then: Didn't see it. I had no idea who Sutherland was for decades. He's another guy who was at the tail end of his career as I began to be interested in baseball.

Other stuff: Sutherland was a utility infielder for most of his career except on two occasions. The first was in 1969 during the first year of the Expos. Sutherland was selected from the Phillies in the expansion draft and became the Expos' starting second baseman in 1969. He scored the first run in Montreal history.

Sutherland didn't last long as the starter, platooning the following year, and then losing his job altogether and getting demoted to the minors. After some time in Houston's minor league organization, he was acquired by the Tigers and inserted as their starting second baseman.

Sutherland started at second for the 1974 and 1975 season. His 149 games played with the Tigers in '74 was a career high. He was not great at getting on base -- despite hitting lead off -- but Detroit was pretty much the worst team in baseball in '74 and '75, so they took what they had.

Sutherland ended his career with bits of seasons with Milwaukee, San Diego and St. Louis. He later worked as a scout in the Padres organization and is now in the Angels' front office. 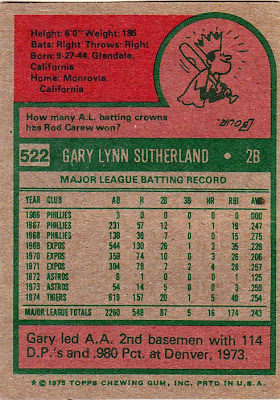 Back facts: Mentioning a minor league feat that occurred seven years into a major league career is not cool, Topps. Not cool.

Other blog stuff: American Top 40 radio host Casey Kasem was born on this date 79 years ago. I spent many a pre-teen Saturday night listening to American Top 40. I am going on record as saying I hated the long distance dedications.
Posted by night owl at 2:16 AM

"Tonight we have a long distance dedication from Watertown, NY to Jonathon B. in Los Angeles. The Owl wants to hear Centerfield by John Fogerty to let JB know to stay in the pen".

I spent many a weekend listening to Casey Kasem's show on WTNY out of Watertown. He was more than just the Top 40 guy to those of us who grew up in the 1970s...he was the voice of Shaggy on Scooby-Doo, Alex on Josie and the Pussycats and Mark on Battle of the Planets.

My other blogs are music-related and mention him quite often. However, word's filtering in that Casey isn't doing so well health-wise. However, as long as repeats of his radio show are playing in "radio land," he'll always be around even though he's retired.