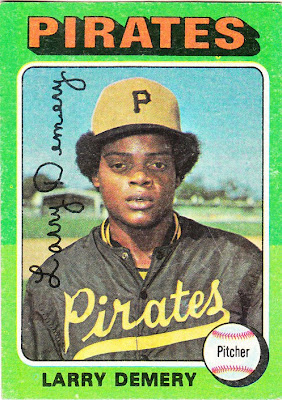 What I thought about this card then: Wasn't aware of it.

What I think about this card now: A big thumb's up for the sideways signature and the black, satin jacket. A big thumb's down for the vacant, mug shot stare.

Other stuff: Demery was a relief pitcher for the Pirates between 1974-77. An arm injury ended his career. He is the son of former Negro League pitcher Artist Demery. Larry's brother, Art, also played pro ball in the Royals organization. 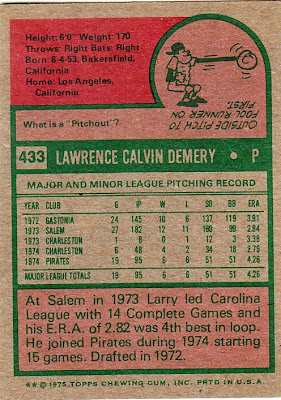 Back facts: I suppose the pitchout is to fool the base runner on first if you're talking about attempting to pick him off of first. But I always thought the pitchout was intended to get a jump on the runner attempting to steal second.

Other blog stuff: On this date in 1999, it was announced that televised Mets games would move from WOR to WPIX. The Mets had been on WOR since 1962, and was the station that I watched the Mets on when I was a kid and in college. Eventually, WOR disappeared, and I blame the migration of the Mets. It was comforting to turn to Channel 9 and see the Mets and I felt lost after it was gone.

During the early years of my fandom (mid-1990s), we had WOR as part of our cable package for some reason. I got spoiled: Orioles games on HTS, Mets games on WOR, Braves games on TBS, and the national games on FOX and ESPN. Plus, I was young and stupid, so the fact that McCarver was with WOR didn't bother me!

Was this guy good friends with Doc Ellis? Just wondering.

If you thought the Mets leaving WOR was bad, there's the other side of the coin. I grew up watching the Yankees play on WPIX. But by '99, Phil Rizzuto was gone, the Yankees went to their own network (more money) and I wasn't in an area where I could watch the channel anyway.

But like Kevin said above, while I was growing up in the 1980s, I had a virtual smorgasbord of baseball: Yankees on WPIX, Mets on WOR, Braves on WTBS (still using its full call letters then), Cubs on WGN (Harry Caray and Steve Stone were at their peak in '84), and since I lived in the northern part of New York, our cable system also included Canadian stations, so I saw the Expos from a Montreal CBC affiliate and the Blue Jays on a Toronto CTV station. And that doesn't even include the NBC game of the week that played every Saturday!

The main purpose of the pitchout is to shorten the time to throw to second because the catcher has already come out of the crouch by the time he receives the ball.

Yet another example of incomplete thoughts and awkward wording on the 75T cartoons.