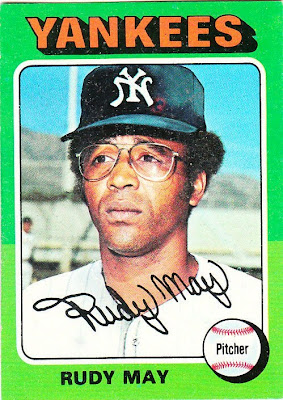 Card fact: This quite possibly could be the most hilarious card in the entire set.

What I think about this card now: Well ... I am very amused by the difficulties that the New York logo gave Topps' airbrushers. They had a horrible time with the logo in the 1974 set (Ralph Houk and Wayne Granger are the main examples). And they didn't show any improvement in the '75 set. That logo looks like it should be graffiti on a brick wall. To top it off, Rudy May seems absolutely crest-fallen over what he must wear. It's like he knew ahead of time how foolish he'd look on his card, even though I'm sure at the time this photo was taken that he didn't have an idea he would end up playing for the Yankees.

Other stuff: May pitched for 16 seasons in the majors, with the Angels, Yankees, Orioles and Expos. Even though he pitched mostly with the Angels and the Yankees, I identify him completely with the Orioles. It's probably because of his 1978 Topps card, which is the first card of May's that I saw.

May was purchased by the Yankees from the Angels in June of 1974, which wasn't enough time for Topps to get a photo of May as a Yankee. He later was traded to the Orioles in 1976 in a massive deal that also sent Scott McGregor, Rick Dempsey and Tippy Martinez and others to Baltimore in exchange for Ken Holtzman, Eldrod Hendricks, Grant Jackson and others.

May enjoyed an 18-win season for Baltimore in 1977, but was immediately traded to the Expos for Don Stanhouse and Gary Roenicke. May became a free agent in 1979 and rejoined the Yankees. He pitched in the postseason in 1980 and 1981, throwing in the World Series against the Dodgers in '81. 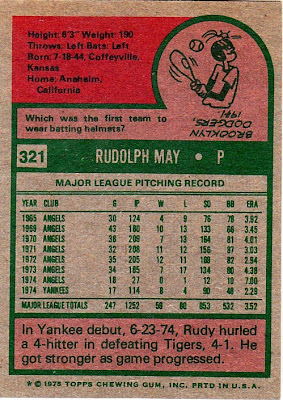 Back facts: The Dodgers are credited with the first batting helmets, but they were more like liners worn inside their regular caps. Pee Wee Reese and Ducky Medwick were victims of beanings the previous year, so the "helmets" were developed for their use. The first team to wear batting helmets as we know them are the 1952 Pittsburgh Pirates.

Re: the writeup. There are some people who dispute a pitcher's ability to "get stronger" as a game progresses, saying it's physically impossible.

Other blog stuff: Bruce Springsteen was born on this date in 1949. He came out with an album in 1975. You may have heard of it. Something about being born to run.
Posted by night owl at 1:24 AM

He does look sad. The giant glasses don't help the look. Are you in the "some people" group?