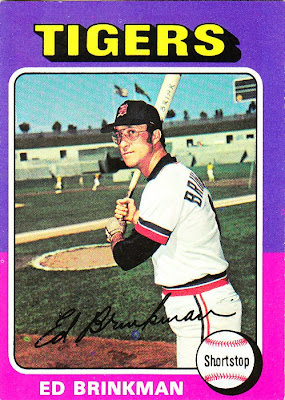 Card fact: This is the final Topps card of Ed Brinkman's career.

What I thought about this card: I associate this card with my brother as it was one of the first cards he pulled during 1975. My brother was a Red Sox fan, but his default teams then were the Rangers and Tigers.

What I think about this card now: I enjoy the Oakland A's frolicking in the background in their golden jerseys. I also like the word "Brink" on Brinkman's bat.

Brinkman was on the field for his glove. He was known as a fielder who could cover lots of ground and he won a Gold Glove with the Tigers in 1972. In fact, he finished ninth in the AL MVP voting that year despite batting .203.

Brinkman was a high school teammate of Pete Rose and received a large signing bonus from the Washington Senators. He played with Washington for 10 years before being sent to Detroit in a big deal in which Aurelio Rodriguez, Joe Coleman, Denny McLain and others exchanged teams.

Brinkman finished his career playing for the Cardinals, Rangers and Yankees in 1975. He later was a manager in the Tigers' organization and a longtime coach and scout for the White Sox. Brinkman died at age 66, of complications related to lung cancer in 2008. 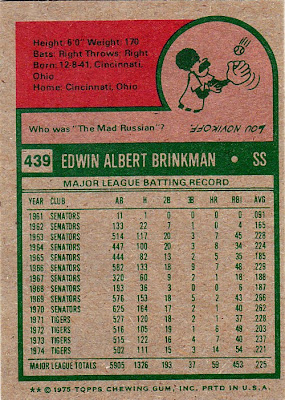 Back facts: Back in the '70s, it was OK for cartoonists to stereotype all nationalities. Lou Novikoff was a war-time outfielder for the Cubs between 1941-46.

Two of the three border combinations just mentioned are a little more than a week away from making a major run on the No. 1 color combination, orange-brown.
Posted by night owl at 12:59 AM

I'd like to see a game where the Cubs wore those hats and the Pirates wore their old hats. Cool.