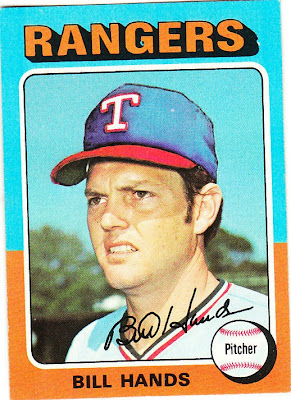 Card fact: Bill Hands is airbrushed into a Rangers cap. You can see he is still wearing his Minnesota Twins jersey. He seems none too pleased about the entire situation.

What I thought about this card then: I remember my brother having this card. We were struck by the look on Hands' face. He looked so angry.

What I think about this card now: Hands has about the same look on his face on his 1976 Topps card. They are the only cards in which he is featured as a Ranger. On all his other cards, he doesn't appear nearly as cranky. Coincidence? Did a Texas Ranger kill his father? We may never know.

Other stuff: Hands toiled in the minors for almost a decade before getting called up to the majors. In a big break, he was traded from the Giants to the Cubs. He became a key part of the Cubs' pitching staff of the late 1960s and won 20 games for the 1969 Cubs, the team that blew the pennant to the Miracle Mets.

Hands continued as a regular starter until he was traded to the Twins after the 1972 season. He played two years for Minnesota, then was acquired by the Rangers in 1974, where he finished out his career. After baseball, he worked in the oil business. He now lives on Long Island. 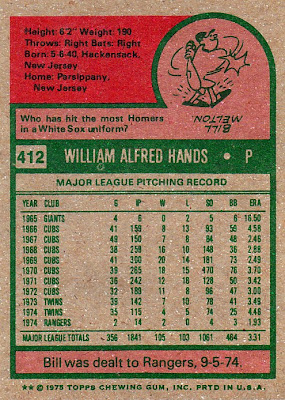 Back facts: Hands actually wasn't deal to the Rangers. The Twins waived him and the Rangers picked him up.  But you can see that the date on which it happened probably threw Topps into a panic. Therefore, the crazy airbrushing.

Other blog stuff: Only one player in the set is celebrating a birthday today. It is Tito Fuentes, who is 67. His card happens to be arriving fairly soon. Rats, I barely missed out on a birthday posting yet again.
Posted by night owl at 2:28 AM

He was probably angry that the Rangers wouldn't make it to the World Series for 35 years. Of course, that might just be hindsight.

If you look at all his cards (except the 73 in action shot) he has the same facial expression. Which leads me to the same conclusion...his face was stuck that way. I think he taught Morgan Fairchild the upsidedown smile.

He was still pissed off about how the 1969 season turned out.