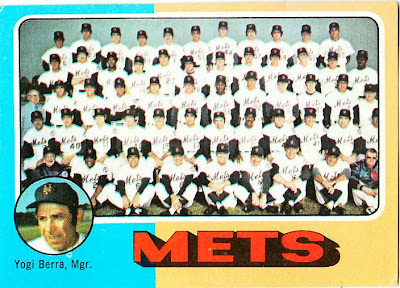 Card fact: This is not the most expensive checklist in the set, which surprised me when I was collecting it. I figured Yogi's face would boost the cost a tad.

What I thought about this card then: Not much. You know those team cards.

What I think about this card now: Lordy. How many players did the Mets have on their team? It looks like there's 70 people there. Also, the guy in the bottom right corner looks like he's wearing a Red Sox jacket.

Other stuff: Yogi Berra was in the third of his four years as Mets manager. It would not be a good one. The Mets had just come off a World Series appearance in 1973. But they went 71-91 in 1974, good for 5th in the N.L. East. Ace Tom Seaver dealt with hip issues and had an off-year. It would mark the beginning of the decline of the Mets, which would last until the mid-1980s. Berra would be replaced in 1975 and the Mets would finish dead last between 1977-79. 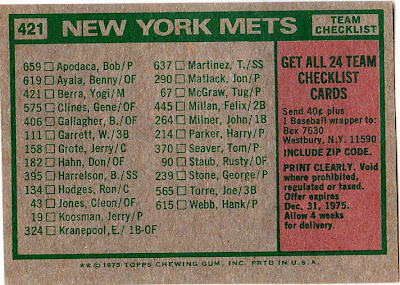 Back facts: There are three players on this checklist who did not play for the Mets in 1974. Gene Clines would come over in a trade for catcher Duffy Dyer. Bob Gallagher came to the Mets from the Astros in a deal for Ken Boswell. Joe Torre was dealt from the Cardinals to the Mets in the offseason for Ray Sadecki and Tommy Moore.

New York put 37 players on the field in 1974. Topps featured 23 of them, including three players airbrushed into new non-Mets unforms -- Dyer, Sadecki and Boswell. Twenty-three players is not a lot. It's one of the smallest numbers for a team set so far.

But the only notable player left out of the set -- and I use "notable" very loosely -- is somebody named Dave Schneck, who had 254 at-bats as an outfielder for the '74 Mets. They would be the most at-bats in a three-year career for Schneck, and his final game would be on Oct. 1, 1974. A .205 batting average that year just didn't cut it with the Mets or with Topps.

Here is where the Mets rate with the other teams so far:

that used to drive me nuts as a six year old collecting OPC hockey. You get a team card and it has 25 players on it. But there were only 17 or 18 of them in teh set. What about the rest???

Is that Willie Mays sitting "indian style" on the first row in the lower left hand corner?

That looks like Willie Mays, but his last year was 1973. Did he stay on with the Mets as a coach or was this Topps using an old photo again?

The dude with the glasses (red sox jacket guy) kinda looks like Ted Williams of all people.