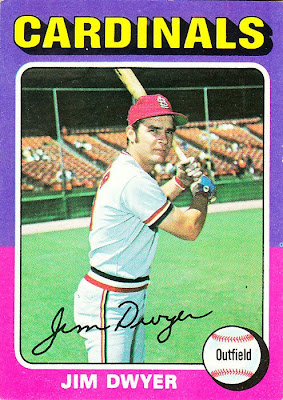 What I thought about this card then: Dwyer was another one of those guys who looked "ghostly" to me. I don't know why really.

What I think about this card now: Lots of dead space in the photograph.

Other stuff: Dwyer enjoyed 18 seasons in the major leagues even though he managed no more than 260 at-bats in any one season. After toiling for the Cardinals, Expos, Mets and Giants, he found modest success with the Red Sox in 1979 and 1980. He was then picked up by the Orioles, who made him into one of their many successful platoon outfielders of the late '70s and early '80s.

Dwyer helped the Orioles reach and win the World Series in 1983 (he hit a home run in the O's Game 1 loss). He continued to produce for the Orioles -- hitting 15 home runs in 241 at-bats in 1987 -- through most of the decade. He ended his career with the Twins.

Dwyer, nicknamed "Pig Pen" for the general state of his uniform, has coached in the Twins organization in several capacities since 1995. 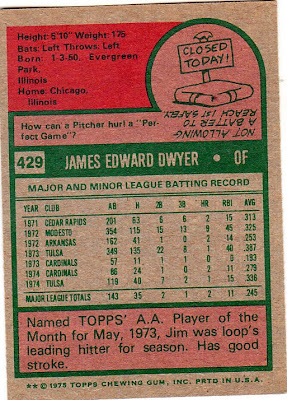 Card facts: I didn't know what a perfect game was in 1975, and I remember being puzzled by the cartoon. Also, whenever I saw major league statistics end with a minor league listing, I thought that was bad news for the player. But it wasn't for Dwyer.

I think that may be my least favorite color combo.

I wish Chan Ho Park would have done what Musial did. "Here Rangers, I didn't really earn that $13 million, just cut me a check for $100 and we'll call it good.