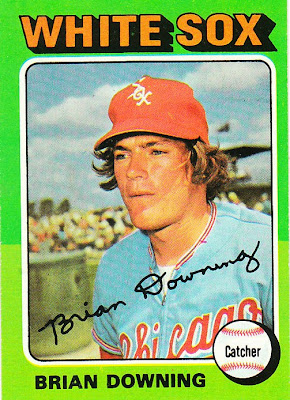 Card fact: This is Brian Downing's first solo card. He makes an appearance on a four-player rookie card in the 1974 set.

What I thought about this card then: This was a card I didn't see until I was trying to complete the set about six years ago.

What I think about this card now: Downing seems transfixed by something off-camera.

Other stuff: Brian Downing was a catcher-outfielder-DH type who came up with the White Sox. He was dealt to the Angels in the deal for Bobby Bonds (and Rich Dotson, Thad Bosley and Chris Knapp), which proved to be Downing's big break.

Downing enjoyed a breakout year in 1979 when he hit .326 in 148 games and made his first All-Star team. The Angels won the A.L. West that season, and there was a lot of talk about Downing's weight-training prior to the season and how it led to his great season. It was the first time that I heard of a baseball player weight-training. That may seem silly to younger fans who know players to train with weights on a regular basis. But it just didn't happen in the 1970s.

Downing continued to play well for the Angels, helping them to another pennant in 1982 and 1986. His time behind the plate decreased and he became more of an outfielder and DH. Downing's career lasted until 1992 with the Rangers. 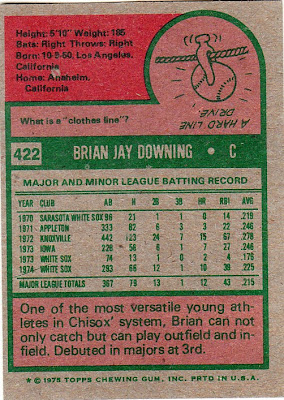 Back facts: I think the term is "clothes-line hit" or "he clothes-lined that." A "clothes line" is what holds up your delicates in the summer breeze.

Other blog stuff: The green-light green border combo makes a return after being absent for 63 cards. With this card, it is now in third place among the color combos. Only orange-brown and pink-yellow are ahead of it.
Posted by night owl at 12:46 AM

Now I'm imagining your delicates in summer breeze. Thanks for that image! I think he almost qualifies as a "dude looks like a lady" candidate.

I remember loving this card back then. Even now, I still love it and I am not quite sure why.