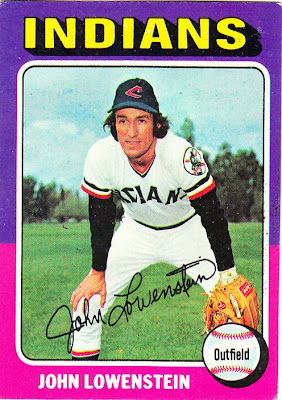 What I thought about this card then: I didn't see it. First card of John Lowenstein I saw was in the 1976 Topps set. I've only known him with a mustache.

What I think about this card now: It's weird. No mustache. No permed-out hair. No giant eyeglasses. He doesn't look the Lowenstein I know.

Other stuff: Lowenstein was a lifetime platoon hitter, except for the 1974 season, which was the only season out of his 16-year career in which he had more than 400 at-bats. He played his first eight years with the Indians. But after a trade to the Rangers, and being released the following offseason in 1978, he received his big break.

The Orioles picked him up and that began the most notable part of his career. Lowenstein played seven seasons with Baltimore, exclusively as a lefty-platoon guy. I distinctly remember Earl Weaver always platooning him and Terry Crowley with Gary Roenicke during the 1979 postseason. It seemed like every time the Orioles played, they'd send eight pinch-hitters to the plate.

It actually drove me a little wacky because I wanted the Angels to win the ALCS against the Orioles that year and then wanted the Pirates to beat the Orioles in the World Series. But every time I turned around Lowenstein was getting a hit. Or maybe it was Crowley. I don't know. They seemed interchangeable.

It didn't help that Lowenstein was the wacky media-friendly type. He received a lot of publicity. (I particularly like this quote of his: "Nuclear war would render all baseball statistics meaningless.")

Lowenstein also won a World Series ring with the Orioles in 1983. His major league career ended in 1985. After his playing career, he became a color commentator for the Orioles. 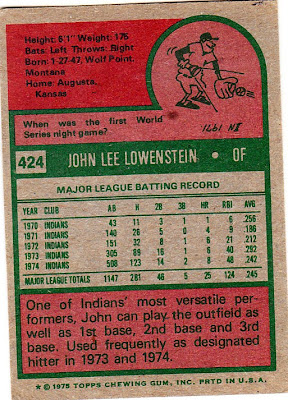 Back facts: The first World Series night game was Game 4 of the 1971 World Series on Oct. 13 in Pittsburgh. The Pirates won 4-3 against the Orioles. Pinch-hitter Milt May drove in the winning run with a bases-loaded base hit in the seventh inning.

Other stuff: On this date in 1970, outfielder Curt Flood filed a lawsuit challenging major league baseball's reserve clause. That didn't lead anywhere ...
Posted by night owl at 2:48 AM

Ah, Brother Lo! His most legendary moment came when he was knocked out in a collision on the basepaths. As he was tended to on the field, he regained consciousness, but played dead until he was being stretchered off. Suddenly, he sat bolt upright, pumping his fists to the roar of the Baltimore crowd.

Classic cartoon for the Night Owl.