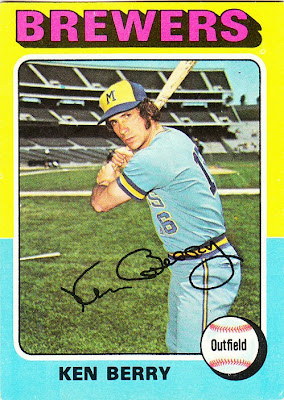 Card fact: This is the final card issued of Ken Berry during his career. In fact, he wasn't a Brewer by the time the set came out. And if you pulled this card after June of '75, he wasn't in the majors anymore.

What I thought about this card then: I had the mini card, but I can't recall a thing. Since Berry disappeared right as I was becoming interested in baseball, I knew very little about him. I still don't know all that much. For the longest time, I got him confused with Rick Barry, the basketball player. That's very strange, because basketball was not a popular sport in my house growing up.

What I think about this card now: Berry looks like an actor from the '70s, but I'm blanking on the name.

Other stuff: Ken Berry was a starting center fielder, mostly for the White Sox, during the 1960s. He then played with the Angels in the '70s before ending with the Brewers and Indians. Berry was a fair hitter, but he was known mostly for his fielding and ability to make leaping catches.

Berry won two gold gloves. He also made one All-Star Game, in 1967, despite finishing the year hitting .241. He played from 1962-75. After his career, he coached in the minor leagues with the White Sox and founded a youth league in Kansas. He also was an advisor for the movie "Eight Men Out," and received a small speaking role at the end of the movie (he plays a heckler).

An in-depth interview of Berry can be found here. 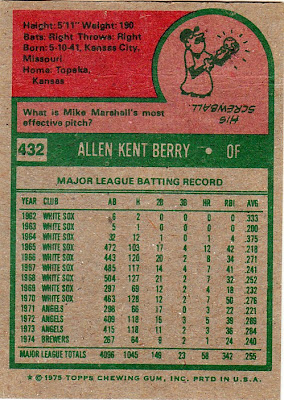 Back facts: "Ken" must have come from Berry's middle name.

Other blog stuff: How about if I show the mini card next to the regular card? 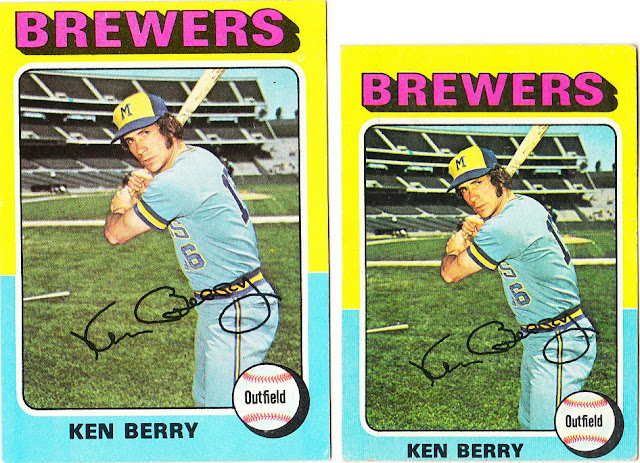 That's starting off your Monday right.
Posted by night owl at 2:06 AM

Well, there was a Ken Berry who was in Mayberry RFD and a frequent guest on Carol Burnett. He had his own summer replacement series : "The Ken Berry 'Wow' Show".

For a guy I've never heard of, he had a long enough career to avoid the write-up. I like the mini-regular comparison.