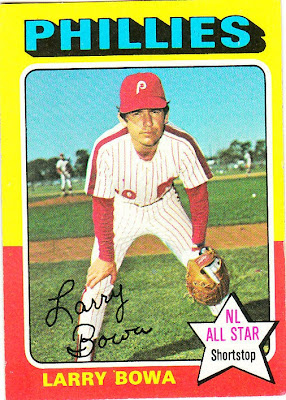 Card fact: Larry Bowa is one of only two starters on the 1974 N.L. All-Star team who didn't play for the Dodgers or the Reds. Hank Aaron is the other one.

What I think about this card now: I am clouded by my childhood adulation of Bowa, and all I can see as one of the greatest cards in the set that I would have killed for as a kid.

Other stuff: Out of all of the players who I wished was on the Dodgers when I was kid, Bowa was first and foremost. He was a five-time All-Star and a Gold Glover. Meanwhile, I suffered (somewhat ungratefully) with Bill Russell, who had some periodic fielding and hitting issues.

Bowa, who never made his high school baseball team, was the fiery cornerstone of the Phillies playoff teams of the 1970s, and he had a standout postseason in 1980 when Philadelphia won the World Series. Later, Bowa was dealt to the Cubs along with Ryne Sandberg in an epicly bad trade for Ivan DeJesus. Bowa played 3-plus seasons for Chicago before ending his career with the Mets, which I totally don't remember.

Bowa went on to manage the Padres and Phillies, and memorably so. I don't think I was aware of his volatile nature until he became a manager. Bowa later became third base coach for Joe Torre with the Yankees, and came over to the Dodgers when Torre was named Dodgers manager. Too little, too late for me. 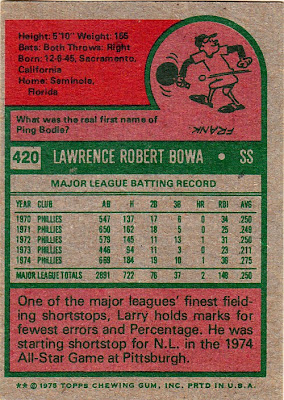 Back facts: Ping Bodie was an outfielder for the White Sox, A's and Yankees between 1911-21.

Other blog stuff: The National League infield is now complete with the addition of Bowa:

Larry Bowa is one player I never thought would hit a home run when he first started. He ended up somewhere near 17-18 for his career. Of course that is how I judged a position player in my early years.

Bowa was one of the guys we noticed during the 1980 World Series. The next year, when we started collecting, we would set his cards in the "star" pile.