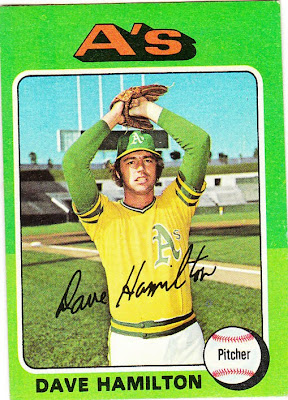 Card fact: This is the 15th Oakland A's card so far, and 10 have had either a border that was green or yellow or both. I smell favoritism.

What I thought about this card then: I didn't see it. Dave Hamilton avoided my collection so successfully that I didn't pull his card until the 1980 set, which also happened to be his final Topps card.

What I think about this card now: You've got have the ball in your glove, son, to be a truly effective pitcher.

Other stuff: Hamilton spent nine seasons in the major leagues, chiefly as a relief pitcher. Out of 301 games pitched, he started just 57. He pitched in all three seasons that the A's won the World Series during the '70s, but he only made postseason appearances for Oakland in 1972.

Hamilton was traded with Chet Lemon (I never knew Lemon started out as an Athletic) to the White Sox in 1975. He was used almost exclusively as a reliever, throwing in a career high 55 games in 1977. After that he skipped around between the Cardinals and Pirates before returning to Oakland for his final two seasons in 1979 and 1980. 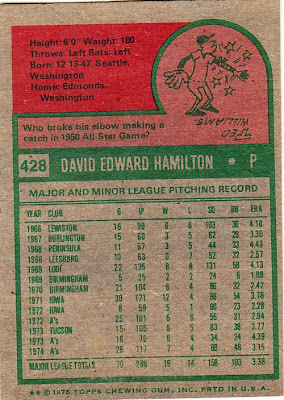 Card fact: You don't hear all that much about Ted Williams breaking his elbow in the 1950 All-Star Game. It was on a line drive by Ralph Kiner in the first inning. Williams crashed into the wall, broke the elbow, but STAYED IN THE GAME. He proceeded to go 1-for-4.

Today, players are removed from the All-Star Game after an inning for no reason at all. Modern players make me so ashamed.

Other blog stuff: On this date, Negro League slugger and Hall of Famer Josh Gibson died at age 35 from a brain tumor.
Posted by night owl at 2:50 AM

Wow, I learned two things just now. I never knew about Williams breaking his elbow in the All-Star game and I didn't know Josh Gibson died so young.

Wow. This is the guy I always blamed for hitting Tony Conigliaro in the face! Jack Hamilton, Dave Hamilton -- What's the difference?