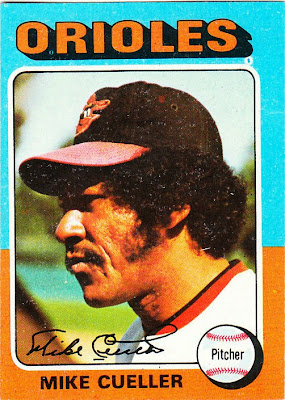 Card fact: Mike Cuellar's name is misspelled "Cueller" on the front of the card. That is a major gaffe.

What I thought about this card then: I do remember my brother having this card. I probably traded it to him because it was an Oriole. I thought Cuellar looked very old. He was 37 at the time. Also, we never noticed the name misspelling.

What I think about this card now: That might be the tiniest signature in the entire set. I think they shrunk it down to fit it in the limited available space.

Other stuff: Cuellar was one of the best starting pitchers that you never hear about now. The Cuban native won 20 games four times within a six-year period. He won the 1969 Cy Young Award (in a tie with Denny McLain), and he could have won it a couple of other times.

Cuellar pitched in a number of big playoff games for the Orioles in the late 1960s and early 1970s. His performance in the 1969 World Series was stellar, despite Baltimore losing in five games to the New York Mets. He hit a grand slam in the ALCS against the Twins in 1970. In 1971, he was part of the only pitching staff to have four 20-game winners in the last 90 years.

Cuellar is now in the top five of several all-time statistical categories for the Orioles. He also pitched for the Reds, Cardinals, Astros and Angels. 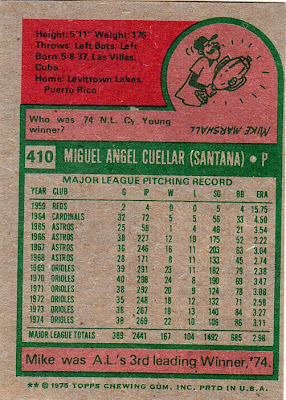 Back facts: It is nice for the cartoonist to apply a touch of realism to the drawing and give Mike Marshall a big ol' stache.

Other blog stuff: On this date in 1975, the No. 1 song in the country was "Angie Baby," by Helen Reddy. What the hell was wrong with people then?
Posted by night owl at 2:36 AM

I've always liked this card... imagining Cuellar trying to understand what Earl Weaver was having a meltdown about.

Major gaffe indeed! As for the Helen Reddy song, I agree, but what is wrong with people NOW when Lady Gaga is such a big hit?