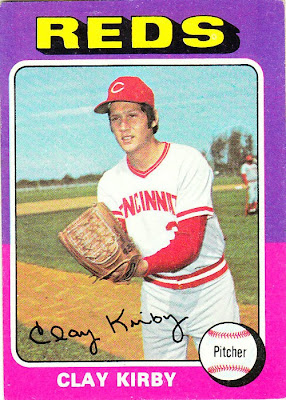 What I thought about this card then: I didn't see it. The first Clay Kirby card I knew was his last one, in the 1976 Topps set. He's displaying a chaw on that card. Unfortunately, no chaw on this card.

What I think about this card now: It's no match for his 1972 In Action card, which is one of my favorites.

Other stuff: Kirby started out in the Cardinals organization, but he was selected by the Padres in the expansion draft and became a starter for that first San Diego team in 1969. He ended up leading the league in losses with 20, just as a pitcher for an expansion team should.

Kirby remained a regular part of the Padres' starting rotation until after the 1973 season when he was 8-18. He was traded to the Reds for a disgruntled Bobby Tolan and Dave Tomlin. Kirby won 22 games over two seasons for the pennant-contending Reds, but he didn't pitch in the postseason for Cincinnati in '75. In the offseason, he was dealt to Montreal for Bob Bailey. He went 1-8 in 22 games for the Expos in 1976 and that was his career. 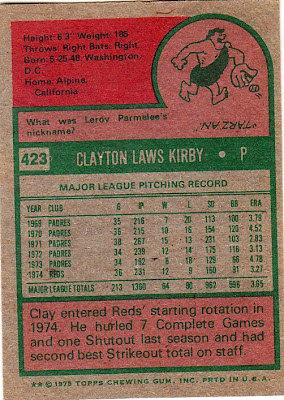 Back facts: I don't know, that cartoon looks more like Fred Flinstone than Tarzan. Still a nifty little cartoon. Leroy "Tarzan" Parmelee pitched mostly for the New York Giants in the 1930s.

Other blog stuff: Charo was born on this date. The year is up for debate. When I was a kid, Charo was one of those actors that was on TV everywhere, and I couldn't figure out why. She'd be on The Love Boat one minute, The Tonight Show the next, the Donny & Marie Show the next. She'd come out, do her little "cuchi, cuchi" act and leave me totally perplexed as to why people were laughing. That '70s humor. I couldn't figure it out sometimes.
Posted by night owl at 3:18 AM

Is it just me or does Kirby look about 10 years old? My grandpa would always perk up when Charo was on with Carson...I'm just sayin'.