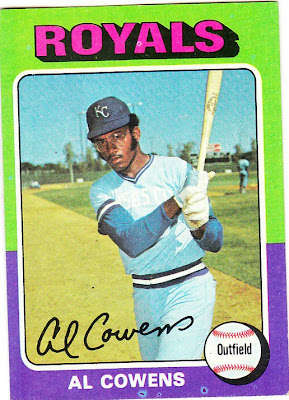 What I thought about this card then: I had the mini card. Cowens wasn't known yet for being a decent hitter, but I thought he was cool anyway.

What I think about this card now: Never mind the card. What's up with my scanning? I must have gone through a lazy period back when I was scanning the set. The last couple cards have been way crooked.

Other stuff: Cowens came up with Kansas City and was a big part of the Royals' AL West championship teams in the late 1970s. His breakout year was in 1977 when he finished second in the AL MVP race to Rod Carew. He also received his only Gold Glove award that year.

Cowens was involved in one of the most notorious on-field brawls in baseball. While with the Royals in 1979, Cowens was hit in the face by a pitch from the White Sox's Ed Farmer. His jaw was broken. Farmer also hit the Royals' Frank White, breaking his hand. I remember it being a big deal and very upset that this guy I had never heard of had taken out two players on one of my favorite teams.

A year later, Cowens was on the Tigers (he was traded to the Angels in the Willie Mays Aikens deal after the '79 season, then dealt in May of 1980 to Detroit for Jason Thompson). Detroit faced Chicago and Farmer was pitching. Cowens hit an infield grounder. While Farmer turned to watch the fielding play, Cowens ran to the mound instead of first and attacked Farmer. A warrant was issued for Cowens' arrest and he was suspended by the league. The two players would later make up during that season.

Cowens later signed with Seattle and spent much of the '80s with the Mariners. He later played in the Pacific Senior League. He died in 2002 at age 50 from a heart attack. 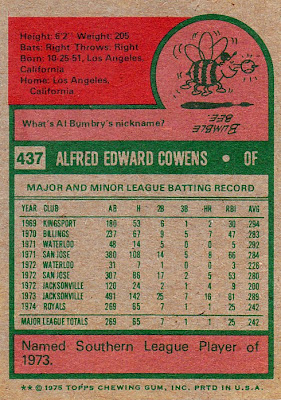 Back facts: Al Bumbry was featured on card #358. Unfortunately, his cartoon is not about Al Cowens.

Other blog stuff: On this date in 1958, Dodgers catcher Roy Campanella suffers a broken neck in a car accident in Long Island. Campanella is paralyzed for the remainder of his life.
Posted by night owl at 3:26 AM

I think the scans are tilting because they want to match the tilted landscape on so many of the cards in this set.

One of the first baseball books I ever read as a kid was about Campy. Tragic story.