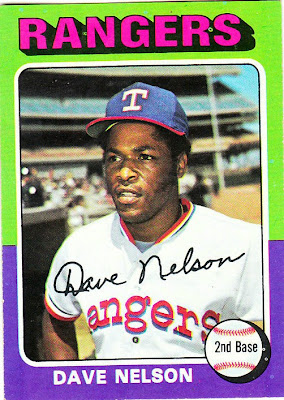 Card fact: Here is another one of the set's weaker excuses for a player getting a card number ending in "5." Nelson hit .236 for Texas in 1974.

What I thought about this card then: This is one of the most prominent cards in the entire set in terms of evoking memories from that first year of buying and collecting cards. The Nelson card was obtained in a pack purchased late at night (it was probably around 8 in the evening, but it seemed like late at night to me) at a drug store. I had been sick and gone to the emergency room. It couldn't have been too serious because my dad took me to the store for a little cheering up (and no doubt to get a prescription filled). Nelson is the only card I clearly remember pulling out of that pack, but it became one of my favorites out of the whole set.

What I think about this card now: There are so many spring training shots in this set, that a photo obviously taken prior to a game really stands out.

Other stuff: Nelson was a speedy second baseman for the Indians, Senators/Rangers and Royals from 1968-77. His real emergence in the majors came after he was traded from Cleveland to Washington and then after the Senators moved to Texas. In 1972 and '73, Nelson became one of the top base-stealing threats in the American League. He was second in the league in stolen bases in '72 and third in '73.

By today's standards, Nelson accumulated a few too many CS's and also didn't get on base as often as you'd like for a lead-off guy. After back-to-back down years, the Rangers sent Nelson to the Royals for Nelson Briles. That's right, one Nelson for another Nelson. Dave Nelson played for K.C. in '76 and '77.

After his playing career, Nelson coached and worked in the minor leagues for a variety of teams. He also dabbled in broadcasting, which led him to his current career, working Milwaukee Brewers games for FSN. 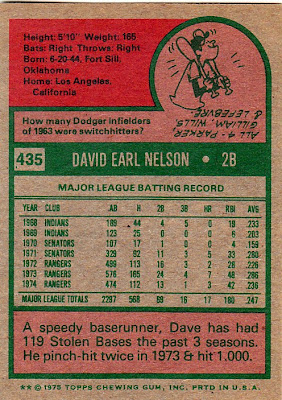 Back facts: The trivia question in this cartoon was one of the first that I ever absorbed. I've known about that Dodgers' switch-hitting infield all of my collecting life. Also, because of the way the bats are drawn in the cartoon, I thought the baseball player was carrying two shovels.

Other blog stuff: Here is the card that I pulled out of that pack while fresh out of the hospital: 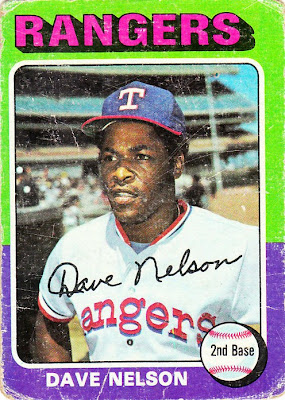 That's a good lookin' card. I'm not biased or anything. I really like his '73 card.