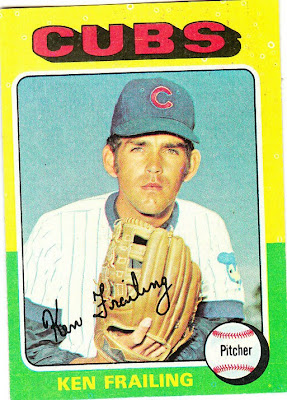 Card fact: This is the first and last solo Topps card of Ken Frailing issued during his career.

What I think about this card now: When I was trying to complete the set back in 2004, this was one of the few players I came across who I had never heard of prior to seeing his card.

Other stuff: Frailing was a relief pitcher for the White Sox and Cubs between 1972-76. He was dealt to the Cubs in the trade that sent Ron Santo to the White Sox. Frailing's career was shortened by an arm injury. 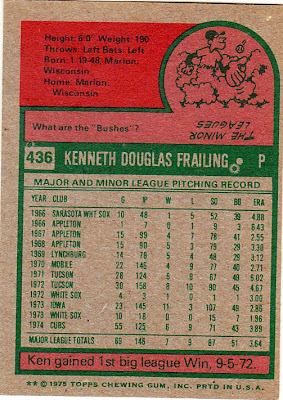 Back facts: The 55 appearances that Frailing made during the 1974 were just shy of half of all the major league appearances he had during his career.

Other blog stuff: On this date in 1901, the American League officially becomes a major league alongside the National League. Only a minor league prior, the major league AL's teams are Cleveland, Boston, Baltimore, Washington, Chicago, Milwaukee, Detroit and Philadelphia. Buffalo, Indianapolis and Minneapolis are dropped.
Posted by night owl at 12:59 AM

How appropriate that the cartoon references the minors and his stats are filled with minor league seasons.

At first I felt bad for him that this was his only card, then it hit me. I don't have any so no pity for him. At least he got his one card in an awesome set.

Frailing also was on a 1974 rookie pitchers card. He was pictured in a White Sox uniform. Also, he was on an SSPC card with a hair style much more from the 1970's.