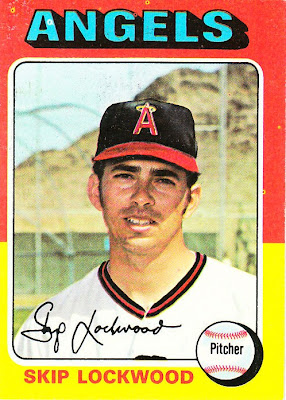 What I thought about this card then: Oh, boy, this was one of those cards that I really, really liked for no reason. My brother had this card. I thought it was very cool. I think it was because of his name, which is strange because "Skip" is actually a terrible first name. It's a step away from "Skippy," and no one wants that.

What I think about this card now: What is that mountain/hill/mound called that appears in the background of all of those Cactus League photos? I know someone has mentioned it before. Help out the poor Northeasterner.

Other stuff: Lockwood is known mostly for his relief work for the New York Mets during the late 1970s. But before that he was a starter, and before that he was a third baseman. He converted to pitcher in the minor leagues. After coming up with the Seattle Pilots, he was a starter for the Brewers in the early '70s. When he came over to the Angels in an eight-player deal, he became a relief pitcher.

Lockwood bounced from the Angels to the Yankees to the A's to the Mets in a matter of months before finding his niche at Shea Stadium. He pitched there for five years. His final season was 1980 with the Red Sox.

Lockwood later became a bank president and CEO of an internet marketing company (he's a graduate of MIT). He's also a motivational speaker. 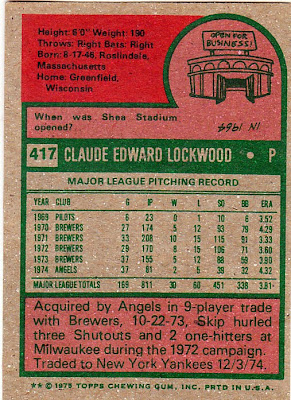 Back facts: As you can see, "Skip" was a nickname.

Also, you see at the bottom the write-up that conveys the panic that Topps felt about all the traveling Lockwood did between the end of 1973 and mid-1975. First they mention the Brewers trade, then they cram in at the end that he's not really an Angel at all! Oops! He was traded to the Yankees after their little airbrush creation.

The Yankees released Lockwood in early April of 1975, so even the sentence that Topps included at the last minute was obsolete by the time many kids pulled this card from a pack.

Other blog stuff: On this date in 1980, Duke Snider was elected to the Hall of Fame in his 11th year on the ballot. I suppose there may have been some complaints that it took him so long to get into the Hall, I don't know for sure. But I guarantee you it was nothing compared to the wailing and gnashing that goes on now.
Posted by night owl at 2:30 AM

Duke Snider was elected in 1980. He went into Cooperstown along with Al Kaline, who wasn't yet eligible in 1975.

And...I know I mentioned that mound of dirt on my blog, as the background of Jim Lonborg's 1973 Topps card

Thanks for the correction. Fixed. Typing "1975" is just a habit on this blog.

Skip is pretty damn good name, especially if you're an announcer.

I think this one was taken at Tempe Diablo Stadium.

42And shall cast them into a furnace of fire: there shall be wailing and gnashing of teeth.

You are right about that sir!

It is Diablo Stadium, and the mountain in the background of this (and so many other 1970s Topps cards) is South Mountain, a well-known landmark in Phoenix. I grew up in Phoenix, and as a kid it was always a treat to see the stadium when we drove by it on the Maricopa Freeway on the way out of town.

Strange the Topps card does not mention that Skip played 3rd base for the KC Athletics in 1965.
To understand the pressure that accompanites the privilege of competing in MLB check out Major League Bride: An Inside Look at Life Outside the Ballpark by Kathleen (Mrs. Skip) Lockwood (McFarland & Co., 2010).

2 of the last 3 cards are relief pitchers of Native American background (Hiller & Lockwood). Need to get Jack Aker In there to make it three. I think Aker is in this set somewhere, as a Chicago Cub. Lockwood had a Topps rookie card in the early or mid 60's as a 3rd baseman on a multiplayer K.C. A's card.