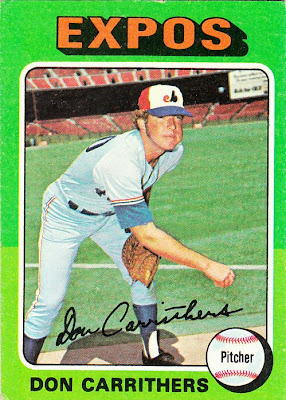 Card fact: This is the second of six straight cards that I also have in mini form. That is a record so far.

What I thought about this card then: I remember it being one of my favorite mini cards. I don't know why.

What I think about this card now: The chaw makes a reappearance! I've been a little disappointed by how few players have displayed their filthy, disgusting habit on cardboard. Maybe Don Carrithers will inspire a few more now.

Other stuff: Carrithers was mostly a relief pitcher for the Giants and Expos between 1970-77. He played briefly for the Twins at the end of his career, which ended by the age of 28, mostly because he suffered from injuries throughout.

Carrithers was dealt from the Giants to the Expos in April of 1974. Carrithers is pictured here in Candlestick Park, which makes me suspicious. But he's definitely in a non-airbrushed Expos uniform. 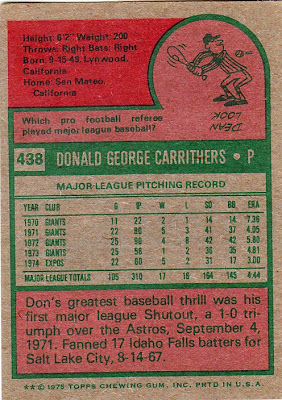 Back facts: I often wonder when card backs read "Don's greatest baseball thrill was ..." whether it actually was the player's "greatest thrill" or whether Topps is feeding you a line.

Other blog stuff: On this date in 1958, the fans' right to vote for starters in the All-Star Game was taken away by commissioner Ford Frick after Reds fans stuffed the ballots prior to the '57 All-Star Game. Bowie Kuhn returned the right to the fans in 1970.
Posted by night owl at 3:03 AM

Carrithers, while with the Twins was in a car accident early in the 77 season. He was out for about 3 months. More seriously injured in the accident was a promising pitcher, Mike Pazik who might of had a breakthrough season.

The chaw jumps out at you...3D style. I want to know what that sign in the background says.

By the way, when I click on the image, I get a scary Microsoft warning that 3g.blogspot(DOT)com is an unsafe website. That's the first time I've ever seen that. Do you know what that is?

Nope. I don't get a message when I click on the image.

I was a lifelong Expos fan and followed then from '74 through their sad departure. I had this card too, and it was my favourite, because it was one of the only Expos cards I got despite all my numerous purchases of the series! The only other Expos i got were Steve Renko and Dale Murray.
And yes, I saw him at Jarry Park in Montreal ,and also a bit at the Big Owe, and he always had the chaw.