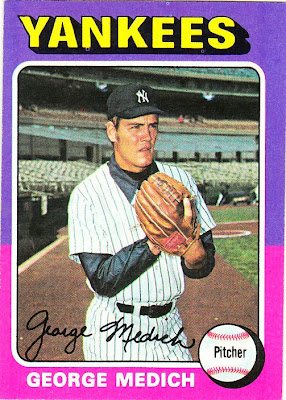 Card fact: George Medich was known as Doc Medich for just about his whole career, but he was never referred to as "Doc" on the front of a Topps card.

What I thought about this card then: I vaguely remember owning this card early in 1975. A Yankee fan probably demanded that I trade it to him. And I didn't have it anymore.

What I think about this card now: Medich is the original "Doc" to me. Before Gooden, before Halladay. But after some other folks, like Edwards and Cramer.

Other stuff: Medich came up with the Yankees and was pretty successful from the start, winning in double figures in each of his first three seasons. That enabled the Yankees to coax Willie Randolph and Dock Ellis from the Pirates in a trade after the 1976 season.

Medich pitched for the Pirates for a year, then went through the most tumultuous period of his career, traveling from the Pirates to the A's to the Mariners to the Mets to the Rangers in an eight-month period of 1977. He pitched for Texas for six years, then ended his career with Milwaukee in 1982.

After 10 years without a postseason appearance, he finally reached a World Series in his last season, throwing two forgettable innings for Milwaukee in a 13-1 loss to St. Louis in Game 6. Medich gave up six runs and five hits in two innings of relief.

Medich received his nickname because he was a medical student in college and then received his medical degree. He became an orthopedic surgeon after his baseball career ended. Sadly, he was plagued by drug addiction and pleaded guilty to illegal possession of a controlled substance in 2001. He was sentenced to probation and his medical license was suspended. 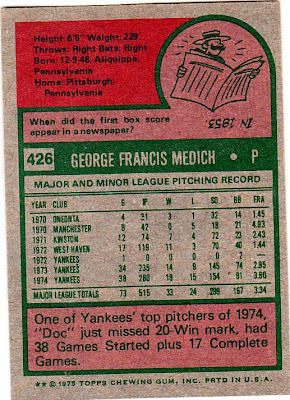 Back facts: The cartoon recounts the greatest feat in the history of time.

Also, the notation of a dash for a player's ERA confused me as a kid. I didn't know why it was there. Later, I found out it was there because Medich had no definable ERA in 1972. He gave up two runs without retiring a batter in one game. His ERA was infinity. I think it would be cool if Topps wrote "infinity" instead of the dash, but maybe they thought that was cruel.

Other blog stuff: A member of the 1975 Topps set, Billy Grabarkewitz, was born on this date. The man with the last name that's fun to say is 65 today.
Posted by night owl at 2:35 AM

As kids, we thought Medich would make the Rangers great. Kids can be dumb, but we always had hope.

Didn't Medich try to save a fan who had a fatal heart attack early in his career?

Here in Milwaukee he was known as one of slowest pitchers in terms of game speed. Radio guys make jokes about it.

Yup, he went into the stands to try to save a fan a couple of times. One fan died later that day or the next day. The other fan -- the guy with the heart attack -- apparently lived for a few more years.

He was one of my first favorite players, and I'm pretty sure it was because of that nickname. I had this and his '74 card, and perhaps a few later ones.