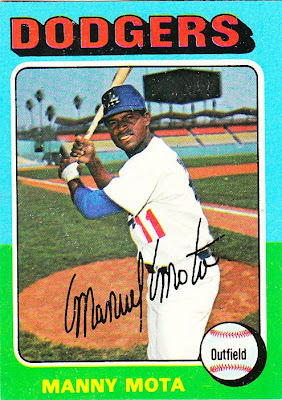 What I thought about this card then: It was one of the last Dodger cards I picked up from the set. Then, when I went about collecting the team set for the '75s, it was the last card I needed. I don't know why Manny Mota was so elusive.

Other stuff: Manny Mota is one of the great reasons to be a Dodger fan. Ever since coming over to the Dodgers from the Expos in the deal that returned Maury Wills to the Dodgers and sent Ron Fairly to the Expos, he has become synonymous with the Dodgers. For a long time, he was the greatest pinch-hitter in major league history, holding the record for the most career pinch-hits. I was quite proud of that.

That record has since been broken, but Mota remains a point of pride for Dodger fans as he's been a coach for L.A. for more than 30 years, which is one of the longest coaching tenures with one team in major league history.

Mota had two sons who played in the major leagues, Andy and Jose. 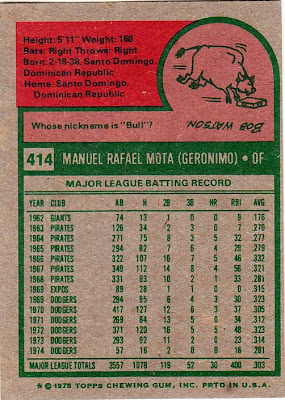 Back facts: If you look at the stats, you can tell that Mota's at-bats dropped off significantly in 1974. That's because this was the first year that Mota was used almost exclusively as a pinch-hitter. He would be used in that role for the next eight years with L.A.

Other blog stuff: This was almost a daytime post. Blogger has been quite bitchy the last hour or so.
Posted by night owl at 3:01 AM

How perfect is that color combo with that photo? The blue sky and wall with the green grass go perfectly with that border. Classic pose, great signature. Nice.

One of my great thrills of last year was talking to Manny in Milwaukee. I don't get ESPN-like interviews, but I get the fun of talking to my childhood baseball cards.
Mota is #2 all-time for coaches with one team, just 1 year ahead of my buddy Rick Stelmaszek.
Love your blog always.

Not exactly Cooperstown numbers, but how many people can say they have a major league batting average over .300 in a career spanning 20 years?