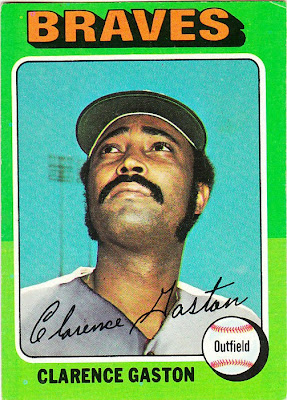 Card fact: Clarence Gaston is wearing a Padres uniform in this photo. He was traded from the Padres to the Braves in November of 1974. Fortunately, Topps had taken a handy "looking up" photo of Gaston just in case, so you can't see the Padres cap he's wearing on his head.

What I thought about this card then: Another one of those cards that I pulled on a July day  in '75, I remember my brother making fun of Gaston's last name. "Clarence has a lot of GAS." That type of thing.

What I think about this card now: It seems so weird seeing his name as "Clarence." Most people now know him as Cito Gaston, which is actually what Gaston prefers to be called.

Other stuff: Gaston came up with the Braves, and was acquired by the Padres in the expansion draft. He enjoyed one great season, in 1970, when he hit .318 and was named an All-Star. But he never came close to hitting that well again. By the time he was traded back to the Braves in 1974, he wasn't starting much anymore. With Atlanta, and then with Pittsburgh at the end of his career, he was backup. He had a good throwing arm, so I imagine he was used as a defensive replacement a lot.

Gaston became much more famous as manager for the Toronto Blue Jays. He was the first African-American to lead a team to the World Series title and helped the Blue Jays to back-to-back championships in 1992 and 1993. He was let go in 1997 and a lot of people wondered why he wasn't rehired by anyone (he did turn down a few opportunities). But the Blue Jays rehired him as manager in 2007. After the 2010 season, he stepped down, probably for good.

Back facts: Gaston did finish third in the National League in assists with 16 in 1973.

Other blog stuff: Here is the original '75 card of Gaston that I pulled 36 years ago: 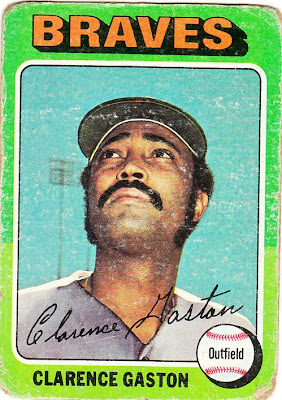 Hey, it may look they airbrushed his mustache on, but at least he's not crying.