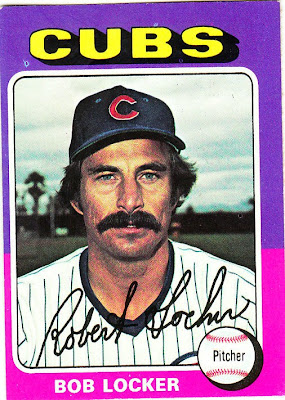 Card fact: This is the final card of Bob Locker issued during his career.

What I thought about this card then: Never saw it. But upon my return to collecting, starting out by trying to complete this set, this was one of the first cards that I picked up. I was at a collectibles shop and one of the dealers had this huge box of nothing but '75 cards. I would go there around noon each week and try to nab as many '75s as I needed.

What I think about this card now: It's off-center and I should upgrade.

Other stuff: Locker's claim to fame is he pitched 10 seasons in the major leagues, appearing in 576 games, and did not start a single game. That was very unusual in the 1960s and '70s. After five years with the White Sox, he was traded to the Seattle Pilots. He pitched for Seattle and then Milwaukee before being purchased by Oakland.

Locker had his best success with the A's, settling into a set-up role for relief pitcher Rollie Fingers during the 1972 World Series championship season. But he was dealt to the Cubs after the season. Locker enjoyed another strong season with Chicago, but apparently told Chicago management that he would play only one season with the Cubs, because he wanted to return to Oakland where his family was.

The A's reacquired Locker for 1974, but Locker underwent arm surgery and didn't play the entire year. After the season, he was sent back to the Cubs in the deal for Billy Williams. He pitched in 22 games that final season in '75. 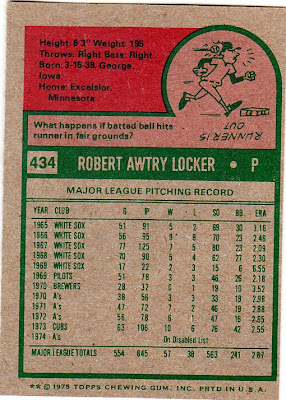 Back facts: You can see Locker's lost '74 season in the statistics. Topps must have loved the transaction of Oakland trading Locker back to the Cubs in October of 1974. Normally, that would require Topps to pull out the airbrushing equipment and paint Locker into a Cubs uniform. But since Locker had played for the Cubs already in 1973, Topps just pulled out an old photo of Locker. Problem solved.

Oh, by the way, what are the chances of the cartoon guy running the bases surviving after getting drilled in the back of the head by a line drive?

Other blog stuff: Former Blue Jays and Cardinals pitcher Tom Bruno was born on this date in 1953. I interviewed Bruno once. He was a pro angler at the time. One of the best interviews with a former major leaguer I ever had.
Posted by night owl at 1:39 AM

Even though the photo was taken two seasons before, it looks like Bob knew it was going to be on his last card.

I just read the Brush with Greatness post with Tom Bruno.

Here's the link for anyone else who wants to check it out.

Nice post. I just got my '68 Bob Locker Topps MCG card back from him a couple of days ago and I am happy that the card is moustache-free.

There is almost no chance of a baserunner getting hit in the BACK of the head by a batted ball. Think about it.