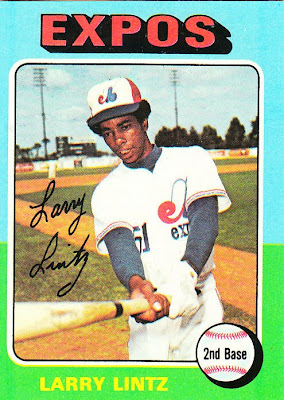 Card fact: This is one of only four Topps cards of Larry Lintz during his major league career.

What I thought about this card then: My brother had it. There's a lot to like about this photo and we did like it. I thought he was a slugger with this pose, which is why the back of the card was so disappointing.

What I think about this card now: If I had been a little more perceptive as a youngster, I would have noticed that Lintz had a small build and looked more like a speedster than a slugger.

Other stuff: Lintz came up with the Expos in 1973. After an OK first year, he played most of the games at second base for the Expos in 1974, but didn't hit very well. The name of his game was stolen bases and he had 50 that season, good for fifth in the league.

In mid-1975, Lintz was traded to the Cardinals. Then, that off-season, he was traded to Oakland (he is wearing a Cardinals uniform in his 1976 Topps card despite being listed with the A's). While with Oakland, he became what Herb Washington was to the team in 1974. Lintz was a full-time pinch-runner, playing in 68 games but getting only four plate-appearances. He stole 31 bases and scored 21 runs (he was caught stealing 11 times).

Lintz was used more conventionally in 1977, but batted just .133. After a brief visit with the Indians in '78, his career was over. 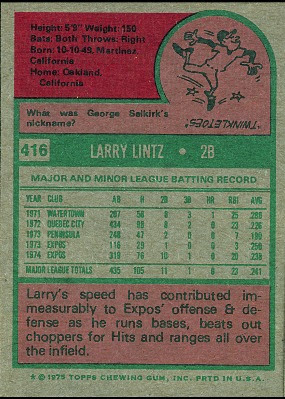 Back facts: George Selkirk was an outfielder for the Yankees in the 1930s. He succeeded Babe Ruth in right field. He received his nickname for the way that he ran on the balls of his feet. After his playing career, he became general manager of the Washington Senators in the 1960s.

Other blog stuff: I was forced to "borrow" a scan of the back of this card as I discovered at the last minute that I had not scanned the Lintz back during the great scanning binge in the early stages of this blog. So this is not the back of my Lintz card. I'm sorry. I assure you it looks basically the same.
Posted by night owl at 12:51 AM

I plan to scan my Lintz card back when I can, so we'll all be able to compare.

The photo looks like he's showing Dark Helmet the size of his Schwartz.

I don't care what your nickname is, succeeding Babe Ruth had to be a tough.