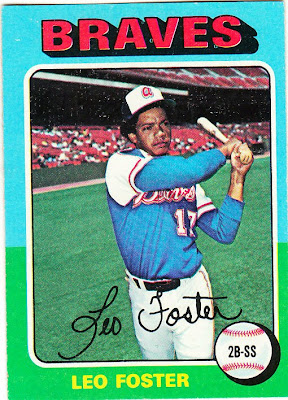 What I thought about this card then: I thought Foster was a scrub. His batting average on the back was not good. He belonged with the scrubs.

What I think about this card now: For the last six cards, every other card has been a "light blue-green" border combination. Someday, someone with knowledge is going to give me insight into the card printing process of the '70s and tell me why these things happen.

Other stuff: Foster was a utility infielder for the Braves and Mets during the mid-1970s. The most at-bats he had in a season was 112 in 1974 when he hit a whopping .196, two points below his career batting average.

After the 1977 season, he was traded to the Red Sox but never played for them. 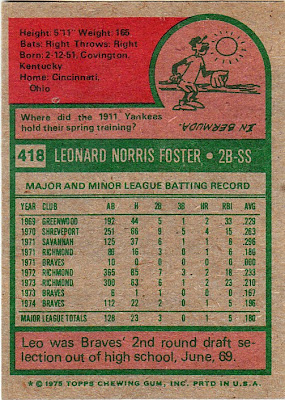 Back facts: The Yankees were actually called the "Highlanders" in 1911. But I suppose that would confuse the collecting kiddies.

Other blog stuff: I haven't done this for awhile. Here is the original Leo Foster card I pulled in 1975, much worse for wear after 35 years (although most of the damage was done in that first year): 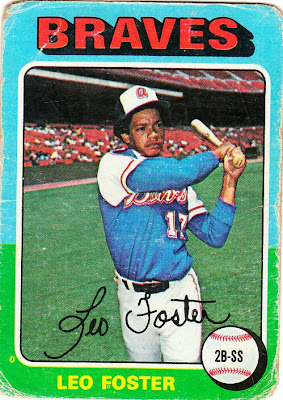 It's more well-centered than the one I have now.
Posted by night owl at 2:05 AM

I appreciate seeing the original too. That's not damage, it's character.

I love cards with a story.