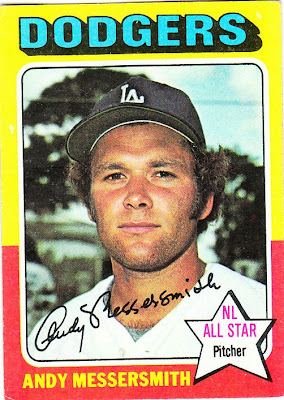 Card fact: With this card, we are now two-thirds of the way through the 1975 Topps set.

What I thought about this card then: I didn't have it, but I was aware of it, and, damn, did I want it. Andy Messersmith was my favorite pitcher that I never saw play.

What I think about this card now: Messersmith's Topps Dodgers cards are the most uninteresting cards that I have seen for a pitcher. In his 1973, 1974, 1975 and 1976 cards he is basically in the same mug shot pose. You can't see his arms in any of the photos. I have a very limited picture of what Messersmith looked like pitching because he was not shown in a pitching pose with L.A.

Other stuff: Messersmith is known mostly for his role in bringing down the reserve clause in 1975. Messersmith followed the path begun by Curt Flood and Catfish Hunter, and refused to sign a contract with the Dodgers after they would not give him a no-trade clause. The Expos' Dave McNally, also on a one-year reserve clause at the time, joined the fight, although he would retire at the end of the season.

Messersmith won the case before an arbitrator and signed a deal with the Braves. It was this decision that kicked off free agency. Messersmith struggled with Atlanta (and I have to say as a kid I thought "serves him right"). He was shipped to the Yankees where he didn't do any better. Messersmith closed his career back with the Dodgers in 1979, interestingly playing with a no-trade deal.

Lost in all this is the fact that Messersmith was a terrific pitcher, first with the Angels and then with the Dodgers. He is one of only 17 pitchers to win 20 games in the American and National leagues (Roy Halladay recently became the 17th). He also won back-to-back Gold Gloves while with the Dodgers.

Messersmith came to the Dodgers from the Angels in the deal that sent Bill Singer, Frank Robinson, Bobby Valentine and Billy Grabarkewitz to the Angels. He pitched in two games of the 1974 World Series against the A's but lost them both.

Messersmith later worked as a coach for Cabrillo College in Santa Cruz County in California.

Back facts: The other 20-game winner in the N.L. that year was Phil Niekro.

Also, how do you get "Andy" out of "John Alexander"?

Other blog stuff: Time to add the third Dodger to the 1974 N.L. All-Star roster:

The N.L. is one player away from being complete. All it needs is another Dodger.
Posted by night owl at 2:00 AM

alexANDEr. ANDE. Maybe. It's a stretch, I know.

Now's the time to be thinking about which set you're going to do next. No break for the NIGHT OWL!!

Messersmith's number with Atlanta was 17. Instead of his last name on his jersey, he wore the word "CHANNEL", since WTBS was on Channel 17 in Atlanta.