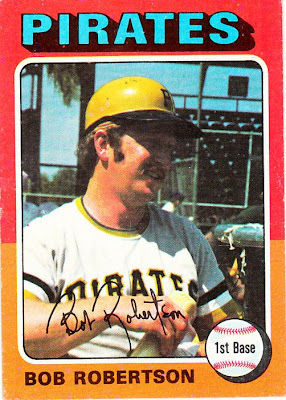 Card fact: Is this the only card with a photo showing the player holding the bat by the barrel instead of the handle? Damned if I know. It's 3:40 in the morning, I'm not checking now. But let's say it is.

What I think about this card now: I think the shadow across the face really kills the photo. That usually doesn't bother me with these '70s cards, but this one does.

Other stuff: Robertson came up to the Pirates as a three-time minor league home run champion. He was expected to provide impressive power to the Pittsburgh lineup. For a couple of years he did, especially during the Pirates' pennant-winning seasons of 1970 and 1971. Robertson is probably most known for hitting four home runs in the National League Championship Series against the Giants. It was a record, which has since been tied twice.

After those two years, Robertson's hitting fell off dramatically. He had knee surgery and became a part-time player for the Pirates. He was released before the 1977 season and didn't play in the majors until the Mariners picked him up for the following year. After a year with the Mariners and an abbreviated 1979 with the Blue Jays, his career was over. 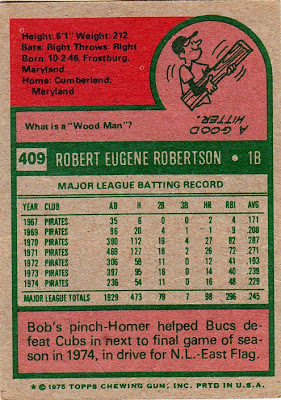 That's about as cluttered a background as I can remember seeing on any of the '75s. Congrats on the first 337, I'm looking forward to seeing the rest.