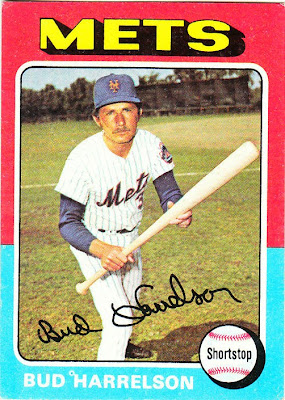 Card fact: It has been 101 cards since the last red-blue bordered card. That might be a record. So far.

What I thought about this card then: I don't recall seeing it.

What I think about this card now: Bud Harrelson was known for being able to put down a sacrifice. But this is the only time that Topps showed him bunting or in a bunting pose during his career. That's too bad.

Also, what the heck is that structure in the background?

Other stuff: Harrelson was part of the Mets' first three pennant-winning teams, playing shortstop for the 1969 and 1973 World Series teams and working as a coach for the 1986 World Series team. As a shortstop, he was your typical good-field, sort-of-hit player that you found at the position in the 1970s.

As a kid, I knew Harrelson more as a Phillie, which is where he spent the end of his playing career (along with the Rangers). I also knew all about his fight with Pete Rose during the National League Championship Series in 1973. But I didn't know that the fight was started when Harrelson made a self-deprecating remark about his hitting, comparing how the Reds hit against Jon Matlack in the previous game to Harrelson's spartan batting skills. Apparently, Rose didn't like that. Harrelson wouldn't have known it though if Joe Morgan hadn't tattled the information to Harrelson that Rose wasn't happy. That may have touched off the fight when Rose went into second base on a double-play ball hit by Morgan.

Once again, Morgan doesn't know when to shut up.

After Harrelson's playing career, he went on to coach and manage the Mets into the early 1990s. He now owns an independent baseball team on Long Island. 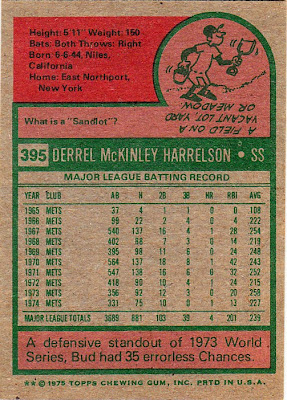 Back facts: I wonder how they got "Bud" out of Derrel McKinley Harrelson.

I stared at that card so long I got a headache. Someone out there has to know what that thing is in the background! We used to play on an honest to goodness sandlot. We all had some serious roadrash at one time or another from that place. Ah, the memories.

It's a pitchers backdrop for the batter. Easier to see that white ball on a black (misshapen and shoddily put up) backdrop.

Just realized it's on the right field line. Perhaps it's to protect some senior citizen's Floridian home.