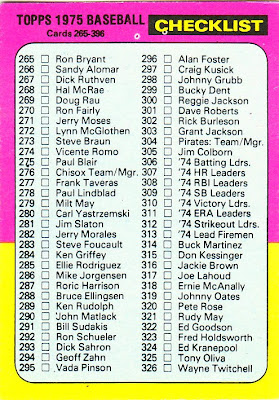 Card fact: This is the first pink-yellow bordered card in 33 cards. Once the overall leader, it is now trailing badly behind orange-brown.

What I thought about this card then: Beats me.

What I think about this card now: It's funny how these checklist cards come along at the best times. I just had a whirlwind 36 hours. I certainly could use a quick-and-easy post.

Other stuff: The name of Dick Sharon is misspelled as "Sahron" at card No. 293. 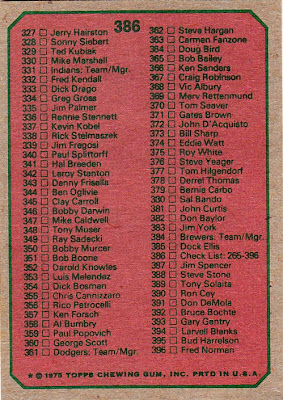 Back facts: Another sneak-peak at the players coming up in cards numbered 387-396, including my most favorite player of all-time (no it's not Don DeMola).

Other blog stuff: A lot of big trades have happened on this date in history. Among them:

The colors remind me of a Mattel toy called the whizzers. They were friction generated tops/gyroscopes that could balance tricks. Still have a yellow and white one.

I know how the Owl feels about checklists, but quite frankly, these things were like gold to me when I ripped through the first dozen or two wax packs that hit the candy aisle at Ben Franklin's in March. I hoped like heck all 6 checklists would appear fast, since these were often the only and best ways to see what else was out there, to imagine what all the missing cards must have been or looked like.

But sure, after getting all six of them, they were card non grata.

Wow, two of the best trades in Orioles history and one of the worst, all in the same day!

For someone who needed an easy post, you found some great trade info to add! Oh yea, it's catchup time too.