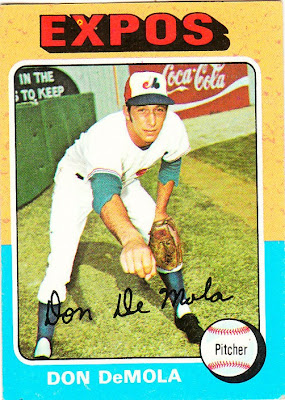 Card fact: This is Don DeMola's rookie card. He'd have only two Topps cards in his career. His 1976 card was his last.

What I think about this card now: Once again, the Coca-Cola ad is prominent on an Expos card. This is one of the best examples, and rivals the Ernie McAnally card. Also, I'd love to know what the sign says beyond the green fence -- "in the to keep" is leaving me in the dark.

Other stuff: DeMola came up with the Yankees in the late 1960s, but was released and out of baseball in 1972. He signed with Montreal and competed as a reliever in 85 games for the Expos in 1974 and 1975. He played in the minors in the late '70s, but never returned to the majors.

DeMola later got into the fur business and teaches some baseball. 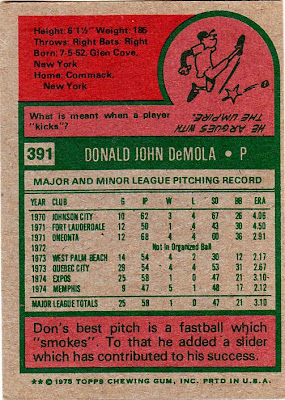 1. I have never heard the term "kicks" in reference to arguing with an umpire. I've heard of a lot of old-time phrases that others haven't (ballhawk, etc.), but this is totally new. How would you use that in a sentence?

3. How do you know when a baseball "smokes"?

Other blog stuff: DeMola was just featured on another blog. Funny how that happens.
Posted by night owl at 2:17 AM

Never heard the team "kicks" in reference to umpires. Maybe his fastball disappeared for 15 minutes every hour (you know, it took a 3 five minute smoke breaks). Maybe that's just my co-workers who "smoke".

That's a phrase I've seen a lot, but it's always used when describing the 19th century and from journalists of the time.

It would read something like this: "The Cleveland captain, Tebeau, kicked at the ump vociferously until he was excused from action."

I'm obviously re-reading your '75 blog since it is so good. Couple comments. The DeMola photo was taken at Daytona Beach Stadium, the Montreal spring training home from I believe '73 to around '83. That shot is back on the warning track and the black sign is an appeal to fans and said something like "Please keep ___ in the stands to keep players safe."(the article in which I saw that seems to not be available any more). The regular Montreal spring training home outside the above years was at West Palm Beach Municipal Stadium, a facility they shared a bunch of years with the Braves. It is there that the Gentry and Blanks photos were taken.