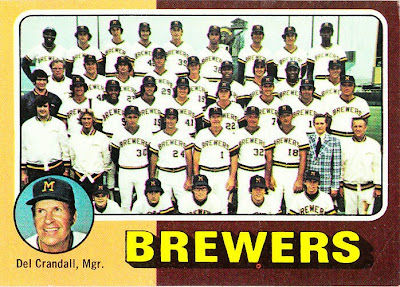 Card fact: This is the only team card in the set in which all of the players are standing instead of some standing and some sitting. It certainly stood out to me, as I always wondered why the Brewers took the all-standing approach.

What I thought about this card then: I just told you.

What I think about this card now: White jackets are not a good look. Why did they wear them?

Other stuff: Del Crandall, the former standout Milwaukee Braves catcher of the 1950s, was in his third year of trying to turn around a franchise that was only in its seventh season in 1975. Crandall was never able to get the Brewers higher than fifth in the six-team American League East. He was dismissed at the end of the 1975 season. 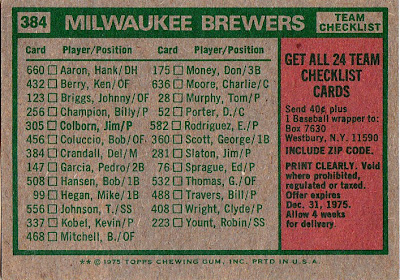 Back facts: It's good to see that Topps was able to get Hank Aaron on the checklist as a Brewer. A couple other players traded in the 1974 offseason didn't make their new team's checklist.

Even with the addition of Aaron and the new arrival of Robin Yount there wasn't much else to this team. A lot of names forgotten by time.

The Brewers used 36 players in 1974. Topps featured 24 of them, including Dave May, who was traded for Aaron and is featured as a Brave on his 1975 card.

Among the players Topps did not feature was Deron Johnson, who had 152 at-bats, mostly as a designated hitter. I suppose Topps was scared away by his .152 batting average. A year later, Johnson was in the 1976 Topps set with Boston.

Topps also didn't have a card of a young Sixto Lezcano, who batted 54 times, which was more than Gorman Thomas, who had a card in the '75 set.

So, here is where the Brewers rate with the other teams shown so far in terms of percentage of players featured by Topps:

Are the white jackets worse than the plaid jacket?

Johnson split the 1974 season between Oakland, Milwaukee and Boston. The reason he isn't included in the '75 set as a Brewer is very simple: like Dave May, he was no longer with the Brewers as the set was being assembled. Johnson didn't even finish the 1974 season with Milwaukee. The Brewers sold him to Boston in early September.

According to baseball-reference.com, the Red Sox released Johnson after the season. This is probably why he isn't included in the '75 set at all. We've encountered a few exceptions, but it seems to have been Topps' standard operating procedure at the time not to include any player who had been released and hadn't yet caught on with another team. That sub-.200 batting average (.171 for the season, across all three teams) couldn't have encouraged Topps to go out of their way to include Johnson in the set anyway.

Today, we're accustomed to the idea that during the offseason there will be guys who don't have a team at the moment, but this doesn't mean they won't play in the upcoming season or aren't deserving of being included in a baseball card set for the upcoming season. Sometimes it takes free agents a while to get a deal; sometimes teams let players go for purely financial reasons. If the player doesn't have a new team yet, you just show him with his old one. In the days before free agency and arbitration, by contrast, a team could essentially control a player forever, so it didn't really make sense to release him unless he was perceived as having virtually no value. For a player to not be on any team during the offseason marked him as a very marginal player, probably not worthy of being included in a baseball card set. It didn't make as much sense to just show him with old team.

Johnson ended up signing with the White Sox, but not until a few days before the 1975 season opened. They traded him back to Boston late in the season. So he finished both the 1974 and 1975 seasons with Boston, but spent most of both years elsewhere. Johnson started '76 with Boston, but was released with the season in progress, bringing his major league career to a close.

I'm with PATP ... what was that guy thinking when he got dressed that morning? At least the white blends in.

Also...Johnson had a couple of really solid years in the 60s and early 70s. I never knew that.

How about the pitchers? Remember the Brewer's version of the Spahn and Sain thing:

"Travers and Slaton and two days of waitin'"

That was from '76 when they each had nice - but ultimately losing - seasons.