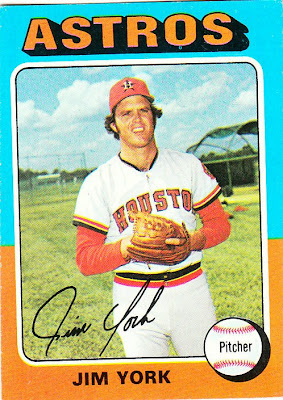 Card fact: As you can see, this card is definitely miscut. The framed photo appears tilted within the colored borders. It's surprising how many of these I discover for the first time on the blog. For some reason they don't register when I look at them in my collection.

What I think about this card now: Jim York is an Astro, and if you've been following along you know that most of the Astros photos for this set appear to have been taken on the sun-baked open prairie. But the grass is in better shape behind York than in some of his teammates' photos. And you can actually see signs of life in the background.

Other stuff: York pitched seven years for the Royals, Astros and Yankees. He appeared in 174 games and started in just four. Most of his major league time was spent with the Astros after Houston acquired him in a trade for John Mayberry. Yes, that John Mayberry. 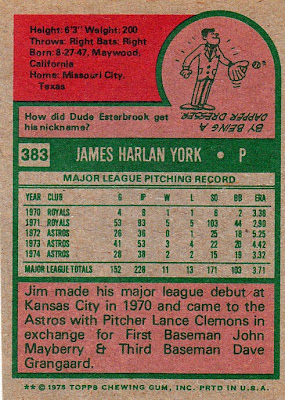 Back facts: Nothing like having Topps document one of the worst trades in Houston Astros franchise history on the back of your card. Mayberry had enjoyed three fine seasons for the Royals by this point, so everyone knew this was a dud deal.

Also "Dude" Esterbrook, whose real name was Thomas, played all the way back in the 19th century. He died 73 years before this cartoon hit the streets. Now that's some history learnin' by Topps.

Other blog stuff: This is the sixth blue-orange border combination in the last 20 cards. It's making a run, but it's still way behind overall leader orange-brown.
Posted by night owl at 12:27 AM

My earliest memories of the Astros are of the day-glo orange unis so these are always strange to me. The orange is there, but it doesn't look so much like a Mardi Gras outfit.

I like that one of the few Wiki facts is that he played for the with Chris Chambliss in the 1969 College World Series.

Dave Grangaard can always tell strangers in bars that he was on a Topps baseball card.
And after he gets his free beer, he can always say, "I never said I was on the *front.*"