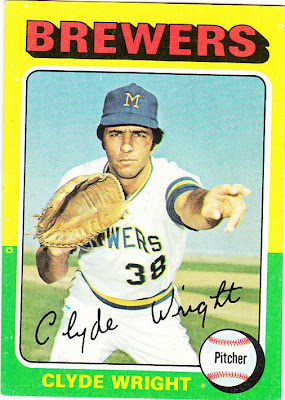 Card fact: It has been 143 cards since the last yellow-green bordered card. That is a record, so far, and the reason why "yellow-green" has dropped to the bottom in the color-combo standings. This is only the 13th yellow-green (lemon-lime combo) card.

What I think about this card now: Nobody's pitching follow-through looks like that.

Other stuff: Wright was a top pitching prospect with the Angels. After hurling a 4-hit shutout in his major league debut in 1966, he spent most of the next couple of seasons in a relief role. The Angels released him after he went 1-8 in 1969. But he returned to the Angels the following spring and went on to a 22-win season, winning Comeback Player of the Year Honors. He also threw a no-hitter that year, and was the losing pitcher in the All-Star Game. He was the one who gave up the winning hit to Jim Hickman, who brought home Pete Rose, who bowled over Ray Fosse.

Wright remained a top pitcher for the Angels until going 11-19 in 1973. He was traded to the Brewers in a nine-player deal, but didn't fair much better with Milwaukee, losing 20 games and posting a 4.42 ERA. The Brewers traded him to the Rangers. After a year with Texas, Wright played in Japan for three years.

Wright is the father of former major leaguer Jaret Wright, who was a sensation with the Indians in the late 1990s and pitched in the majors for 11 years. 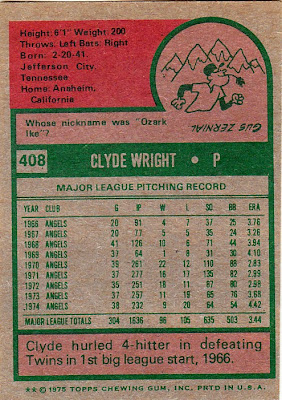 Back facts: There is a mistake in the stats. Topps lists Wright as playing for the Angels in 1974, but he played for the Brewers. That bit of misinformation threw me off. Before doing research on Wright, I studied the photo for signs of airbrushing since I thought Wright was dealt from the Angels to the Brewers in the '74 offseason.

Other blog stuff: This is the second straight player shown who does not have a middle name. Just thought you should know.
Posted by night owl at 12:42 AM

Why didn't Topps put in his nickname "skeeter" as the middle name.

I always think of David Wright when I see Clyde's name. I shouldn't, but I do.