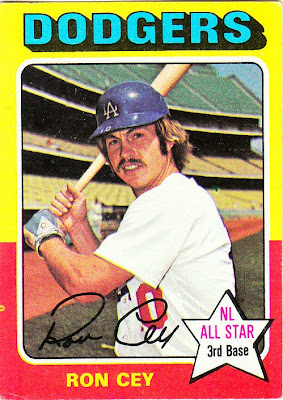 What I thought about this card then: Must. Have. Card.

What I think about this card now: Between the two blogs, I'm sure I have posted this card more often than any other. It's about the 6th or 7th time. I think I've said all I have to say about it. It became my favorite during 1975, I traded the '75 Aaron card for it, and then somehow, tragically, I lost that first '75 Cey card.

Why did Cey become my favorite then? Well, I've studied my younger self enough to come to the conclusion that I liked players with long hair and mustaches and that wore helmets. Add the fact that he was a Dodger, and I think it was a natural fit.

Other stuff: Cey is the best slugger the Los Angeles Dodgers have ever had. He led the franchise in career home runs until Eric Karros broke it. He came through in the clutch in some big postseason moments, most notably during the 1977 NLCS against the Phillies and the 1981 World Series against the Yankees. I remember being especially proud of him when he broke the N.L record for RBIs in the month of April in 1978. And how about the diving catch on a bunt by Bobby Murcer in the '81 World Series?

"The Penguin" had a distinctive trot around the bases -- very much like a waddle. And his batting stance was memorable, too.

I still have no idea why the Dodgers traded him to the Cubs after the 1982 season. No one has been able to give me a good reason. Hey, I liked Pedro Guerrero, too, but put him in the damn outfield.

Cey is now one of the Dodgers' biggest ambassadors, a frequent TTM and in-person signer -- as I will attest. His daughter, Amanda, is a big-time event/party planner in San Francisco. 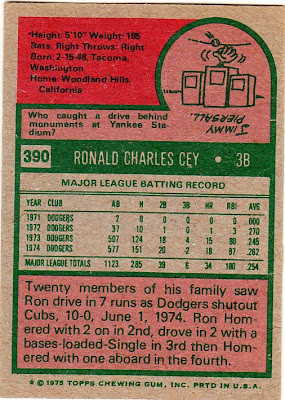 Back facts: I didn't know what monuments were as a 9-year-old. I thought those rectangular drawings in the cartoon were gas station pumps. I thought Jimmy Piersall was fielding a fly down at the local Sunoco station.

Also, I double-checked the game facts in the write-up. They're all correct. Cey was 3-for-4 with 7 RBIs, two homers and a bases-loaded single. He also struck out looking.

Other blog stuff: This is the second Dodger all-star on the N.L. team so far, so let's add Cey to the list:

I had a opportunity to meet Ron Cey years ago. His son Dan was playing high school baseball against my brother's team back in 1992.

Ron was standing behind home plate and I approached him between innings. Not wanting to take up too much of his time, I mentioned that he and the Dodger teams he was on from the mid-70's to early-80's were a big part of my childhood.

After that, I finished the conversation off by saying, "Thanks for the memories" and then left him to enjoy the game.

Back in the day, I thought his forearms were huge.

I think Ron Cey is alot fans favorite player. I think it was because he fundementally sound and of regular size and stature. His importance to the Dodgers, was he was their 1st regular, consistent 3rd baseman since moving to LA. All others were either flash in the pans, transplanted from other position, or found success in other positions/teams.

What a joyous occasion! I really should send a TTM his way since he's one of the best at returning them.

Night Owl, I also traded Hank Aaron's 1975 Topps card straight up for my favorite player at the time, Dick Allen.

In fact, I remember it like yesterday and I had no regrets either. I liked Allen's card, loved the All Star on it, and always thought it was cool how he wore a batting helmet all the time.

Of course, when I turned the card over I was upset to see he was traded to the Atlanta Braves...GRRR!

I think Cey is the most hated player in the history of SF Giants fans. Maybe even more hated than Lasorda. As much as I hated Cey, a Giant killer extraordinaire, I hated Garvey far more.

To be fair, as much as I loathed Cey, this is a pretty good card and even I would say probably one of the best in the '75 set. :)

There are actually people out there that hated Cey? How is that possible? You Giants fans. Such a skewed view.