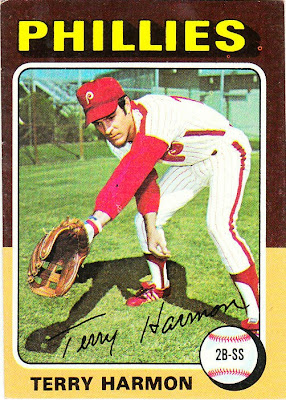 Card fact: The last two Phillies cards have featured the brown-tan color border. Six of the last 25 cards have had brown-tan borders.

What I thought about this card then: Never saw it. But I always got Terry Harmon and Tommy Hutton confused. Both infielders. Both Phillies. Both with T.H. for initials.

What I think about this card now: Just Terry Harmon and his shadow.

Other stuff: Harmon was a lifetime utility infielder for the Phillies. He signed with Philadelphia in 1965 and stayed with them until his release in 1978. He was there for his fielding, because his hitting wasn't much. He batted below .200 in three seasons of his career, including .130 in 1974. He had just 15 at-bats in 27 games in '74, which makes me wonder why he got a card in the '75 set.

After the end of his career, Harmon went into broadcasting. His wiki page says he works for one of the 24-hour cable shows that hawk jewelry. 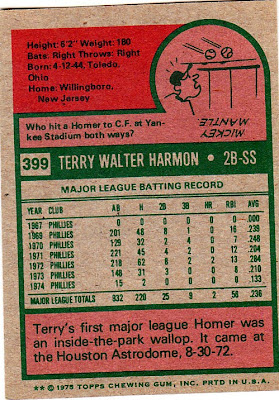 Back facts: I assume when the cartoon says "both ways," it means that Mantle hit a homer to center field as a lefty and a righty.

Also, given that Harmon had just two home runs to this point (he had four for his career), I looked up the pitcher who surrendered Harmon's inside-the-parker. It was none other than Jerry Reuss. The Astros did win the game, 5-3.

Other blog stuff: On this date in 2004, a three-team deal was supposedly completed between the Yankees, Dodgers and Diamondbacks. The Yankees would get Randy Johnson and Kaz Ishii. The Diamondbacks would get Shawn Green and Brad Penny, and the Dodgers would get Javier Vazquez and prospects. The Dodgers backed out the last minute. Phew! Not that L.A. won much with Green and Penny, but that would have been awful!
Posted by night owl at 12:38 AM

Outside of New York, Javier Vazquez hasn't been that bad a pitcher so maybe he would have had success in LA (not that it would have mattered as the Dodgers were going to flip him to the White Sox) if the deal went through.

Interestingly, one of the prospects the Dodgers would have received in that deal was Dionner Navarro.

That centerfielder in the cartoon seems distressed to see two balls flying out of the park at the same time. That is all.

Harmon didn't play in the minors in '74, and the games he played in the majors were scattered throughout the season, without any obvious lengthy gaps. So he appears to have been on the Phillies' major league roster all year, and his lack of playing time must have been due either to injuries of a "nagging" nature, or just to not being used much. When he played, it looks like it was mostly as a late-inning defensive replacement or as a pinch hitter/runner.

I think Topps was more likely to give some slack to guys like Harmon (who were on a major league roster all year but just didn't play much for whatever reason) than to guys who hadn't played much in the majors because they had spent significant time in the minors. That having been said, Harmon's prospects for continuing his major league career couldn't have looked all that great in the 1974-75 offseason. Topps called it right, though, as Harmon would stick around for '75 and even beyond.

I never cared for these infield poses. It looks like the player is just ole'ing the ground ball coming their way. Bad form.