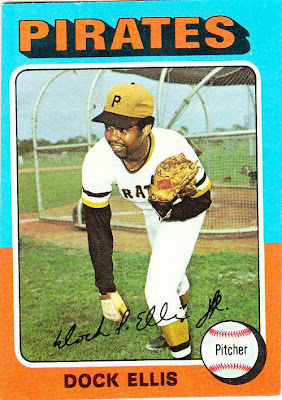 Card fact: Another blue-orange card. This is my favorite color border combination and it's really on a streak now with six of the last 22 cards being blue-orange.

What I thought about this card then: As I mentioned in a tribute post to Ellis after he died, this was a card that I first saw in my friend Jennifer's house. She collected some cards in 1975 and the Ellis card was my favorite of hers. I thought everything about the card was perfect. Finally, that same year, I obtained the mini card and didn't have to lust after someone else's card anymore.

What I think about this card now: Dock Ellis was a Junior? I never knew that.

Other stuff: So much has been written about Ellis in recent years that I'm sure everyone knows his colorful baseball story -- the no-hitter on LSD, the curlers in his hair, the charges of racism. Let's just say that Ellis was a damn good pitcher, but some other things got in the way, some of it his own doing, some of it not. 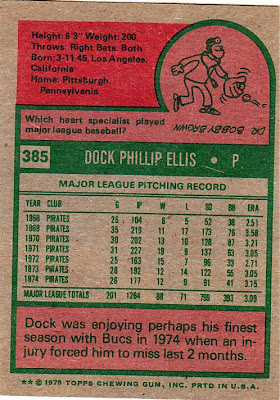 Back facts: I also mentioned before how cool it is that there is a cartoon about a doctor on the back of a card of someone named Dock. And yes, Dock was Dock's real first name. 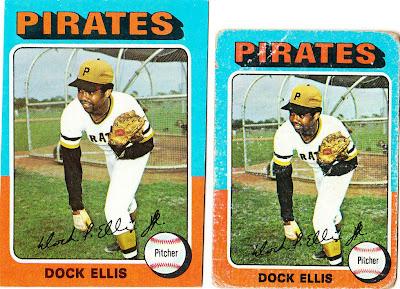 You're mini Ellis represents him well. A very nice card that's been through the ringer.

Is that Bobby Brown the same one who was the President of the A.L.?

How about his gloved throwing hand?