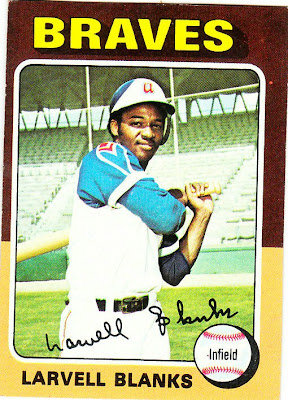 Card fact: This is Larvell Blanks' rookie card. It is also the first time in the set that players from the same team are featured in back-to-back cards. That didn't happen too often in the 1970s. It was usually an indication of a last-minute change. Neither Gary Gentry of the previous post nor Larvell Blanks played very much for Atlanta in 1974. So either card could have been a last-minute swap out for another player who may have retired suddenly and forced the inclusion of either Gentry or Blanks.

What I think about this card now: Lots of things:

1. It's a bit crooked. But you should have seen the previous version of this card. That was criminally crooked.

4. Blanks' position is "infield." He played all of two games in the field in 1974. Both of those were at shortstop. So I don't know why Topps couldn't have narrowed it down more than "infield."

Other stuff: Larvell "Sugar Bear" Blanks came from an athletic family out of Del Rio, Texas. He managed only one year as a starter in the majors -- playing in 141 games for the Braves in 1975. The rest of his major league career, from 1972 to 1980, was spent as an infield backup for some of the worst teams of the 1970s -- the Braves, Indians and Rangers.

After his career -- he also played in Mexico -- Blanks taught and picked up golfing. He now plays on the Golf Channel Amateur Tour. Blanks' cousin, Lance Blanks, a former NBA player, is the current general manager of the Phoenix Suns. 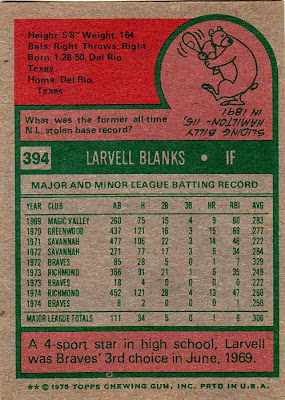 Back facts: The cartoon is a reference to man whose single-season stolen base record was broken by Lou Brock in 1974. But I have no idea why there is a bear holding a bat. Hamilton did not play for the Cubs. He played for the Phillies, Boston Beaneaters and Kansas City Cowboys.

Other blog stuff: Here is an interesting "on this date" fact:

On this date in 1975, Larvell Blanks and Ralph Garr were traded to the White Sox for Ken Henderson, Dick Ruthven and Ozzie Osborn. So I am featuring Blanks' card on the date he was traded 35 years ago.

Also on this date, Ralph Garr was born. So he was traded on his 30th birthday.
Posted by night owl at 3:04 AM

Answer to point 4. One editor to another editor, "Who's Larvell Blanks? I don't know. What position does he play? I don't know. He looks like an infielder to me. Good enough".

If one of these guys was drafted to fill a hole in the set, my money would be on Blanks. Gentry was an established major leaguer who appears to have been on a major league roster in 1974, but just didn't play much due to injury (he did not make any appearances in the minors). It wasn't unheard of for Topps to give cards to guys under those circumstances. It seemed like Don Gullett kept getting cards for a couple of years after his career was effectively over.

Whatever the reason for doing so, Topps called things right by putting Blanks in the set, as he would turn out to be Atlanta's regular shortstop in 1975. If you look at Blanks' past record on baseball-reference, both in the minors and majors, he had moved around a lot between second, short and third, so there may have been some actual logic behind listing his position as "Infield".

Looking at the Braves' 1974 stats, it seems odd that Blanks got a card and Ivan Murrell (73 G, 139 PAs) didn't. Again, though, Topps called things right. Murrell was sent to the minors in '75 and never played in the majors again. Maybe Topps had some specific reason for thinking Murrell wouldn't be on the major league roster in '75 that isn't readily apparent today (perhaps the Braves removed him from their 40-man roster and outrighted him to the minors after the '74 season ended). By that point in his career, Murrell was a very marginal major leaguer anyway, so it probably wasn't much of a gamble to guess that he might not be back in '75.