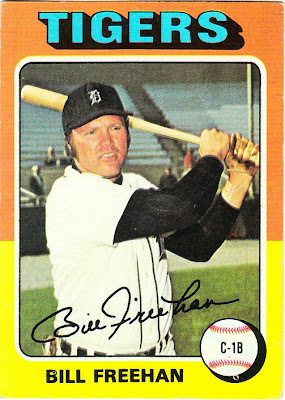 Card fact: This is the only Topps card in Bill Freehan's career in which he is not listed exclusively as a catcher. The 1974 season was the only one in which Freehan played more games at a position other than catcher. He played 65 at first base and 63 beind the plate.

What I thought about this card then: Me no see. The first card of his I saw was his 1976 Topps card.

What I think about this card now: I have never known how to pronounce Freehan's name. I've always pronounced it "Free-HAN," which I suspect is wrong.

Other stuff: Freehan was born in Detroit, played his whole career with the Tigers, and was both a solid hitter and a record-setting fielder. All of those ingredients made him a hero among Tigers fans. He has but two transactions in his entire 15-year career. He signed with the Tigers in 1961 and was released by the Tigers in 1976.

Freehan was an 11-time all-star. His best seasons came in 1967 and 1968, when he was third and second, respectively, in A.L. MVP voting. He set a number of records for fielding, and caught more games than any other player in Tigers history. He ended his career ninth all-time in MLB history in total games caught.

After his career, Freehan did some broadcasting, then became the University of Michigan baseball coach in the 1990s. 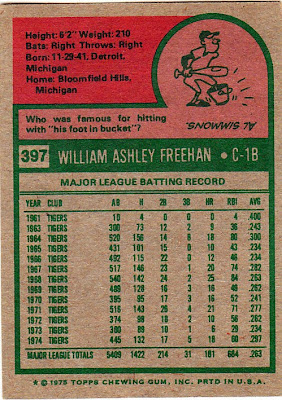 Back facts: I learned about the term "hitting with your foot in the bucket" by reading a story as a young teenager about Al Simmons and the Philadelphia A's famous 1929 World Series comeback against the Cubs. It's been a long time since I ever heard any one mention a major leaguer as hitting with their foot in the bucket. I'm sure the coaches clean that right up these days.

The '73 Freehan is one I got in the MCG gimmick/promo/scam (depends on who you ask) and it's a great patp. I get offers for it every day. I'm going to watch Young Frankenstein tomorrow thanks to you...it's been too long.

Freehan was my boyhood hero, and to this day if my favorite Tiger ever.

Yes, it is pronounced Bill Free-Han. My dad taught me how to say it back in the 70s. He has been a Tiger fan since the 40s. Also Bill Freehan is one of the few players elected 10+ times and not in the Hall of Fame. Steve Garvey is another one. I'm not sure if there are more.

I meant to say 10+ times to the all star game. Sorry about the confusion.