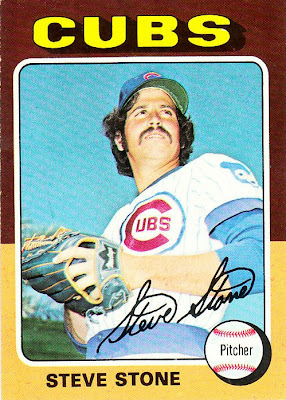 Card fact: This is the first card featuring Steve Stone wearing a mustache. He'd appear in a mustache on each Topps card until his transformation on the 1981 card in which he was clean-shaven, had shorter hair and was fresh off a 25-win season.

What I thought about this card then: My brother and I thought he was an odd-looking fellow. Looking at it now, Stone looks like a friend of mine when I was a kid -- minus the mustache, of course.

What I think about this card now: Well, first, nice coordination of the glove color with the team color. Secondly, there aren't a lot of photos in this set in which the photographer shot up at the subject. I'm not sure why they chose Stone for that treatment. He wasn't exactly a dominant pitcher at this time.

Other stuff: Stone was your typical 1970s pitcher. He was his own kind of guy and he wasn't going to follow the ballplayer traditions of the previous 80 years without thinking about it first. Other 1970s pitchers -- the Carltons, the Marshalls, the Lyles, the Lees, etc. -- were the same way, a new breed. Stone was well-read and did things like visiting a psychic in a bid to improve his pitching.

Stone came over to the Cubs from the White Sox in the famous trade that sent Ron Santo to the White Sox. Stone returned to the White Sox in 1977, then signed with the Orioles as a free agent before the 1979 season. In 1980, Stone started 37 games, pitched 250 innings and won 25 games against 7 losses. He captured the Cy Young Award in a vote that many feel robbed Mike Norris of the award.

But Stone's reliance on the curve ball that season led to arm issues. He had only one more major league season and was retired by 1982.

Stone is now known more for his broadcasting than his career. He began broadcasting in 1983 and paired up with Harry Caray in Chicago for nearly 15 years. He was quite popular. He later teamed with Chip Caray, but became involved in controversy with Cubs players, who complained he was too critical of them on the air (why am I not surprised that Moises Alou was one of the complainers? I do not like anything I hear about that guy).

Stone left the Cubs after that 2004 flap and after a few years landed with the White Sox. He is now partnered with Ken Harrelson. 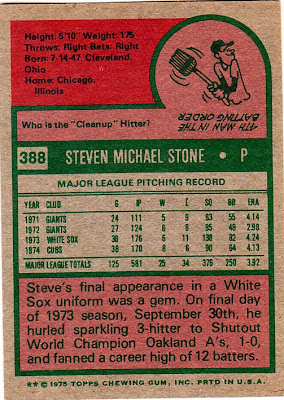 Back facts: Arbitrary capitalization of "shutout" in the write-up.

Other blog stuff: I have no more words. Make something up on your own.
Posted by night owl at 1:08 AM

Stone is one of my favorites in the booth. The guy is amazing. Unfortunately, his is also one of the few non-superstar autographs that has eluded me forever.

Steve also changed his uniform number to 32 when he was with the Orioles to honor Sandy Koufax. He has expressed no regrets over ruining his arm with curveballs, stating that one 25-win season was worth five 15-win seasons to him.

My first glimpse of Steve Stone was on his 1981 Fleer card which was one of my first cards. It said "Pitcher of the Year" and I thought, this guy must be good. And then he disappeared. Living in a small town with almost no live baseball on TV, I forgot about him and never really knew why he stopped pitching. Until now.