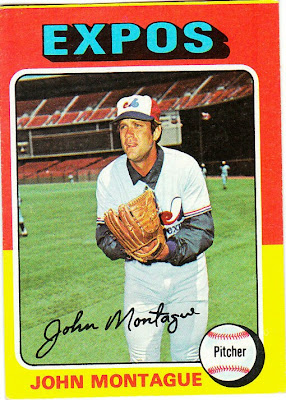 What I thought about this card then: I had it and I thought Montague looked a little too sad for someone who was a professional baseball player.

What I think about this card now: It's miscut and kind of messed up on the top with the yellow showing.

Other stuff: Montague was a relief pitcher for the Expos, Phillies, Mariners and Angels. After a couple of respectable relief seasons for Montreal, he was waived and his career was looking a little dicey. He didn't do well with the Phillies, but was purchased by a new franchise, the Seattle Mariners.

With Seattle, Montague actually did some starting and also recorded the first save in Mariners history. He pitched three seasons for Seattle, then was traded to the Angels. He ended his major league career with California in 1980. He was picked up by the Blue Jays in 1981, but didn't pitch for them. 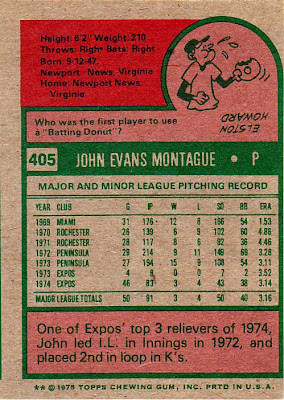 Card fact: This might be the most egregious example of giving a card number ending in a "5" to someone who doesn't deserve it. Back then, cards that ended in the number "5" were reserved for semi-stars. But there would be a slip-up once in a while, and this is a definite slip-up.

Also, Elston Howard is actually credited for inventing the batting donut. Or "doughnut," if you're a stickler.

Other blog stuff: It's time to take a break for the Christmas holiday. All you '75 Topps fans have a Merry Christmas.
Posted by night owl at 12:56 AM

The cartoon subject, Elston Howard is on Trolls Nitty Gritty blog today. I don't think it comes with a "donut".

Happy holidays to you and thanks for a great blog.