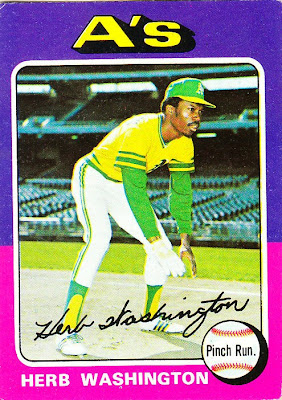 What I think about this card now: One of my all-time favorites. You have one of the most interesting experiments in baseball. You have the bright purple-pink borders clashing with the bright gold-and-green uniform. You have Washington in a dated-yet-wonderful pose. You have him wearing just a single glove. You have the empty stands. Classic, classic card.

Other stuff: I wrote about this card on the other blog. So I'll keep it brief here. Oakland owner Charlie O. Finley thought Washington, a world-class sprinter, could give the A's an edge. Washington hadn't played baseball since high school and didn't really know the game. But in 1974, he played in 91 games as a "designated runner." He never batted nor played the field.

Washington was actually just one of a few players that Finley brought to the team in a bid to add unprecedented speed. But the experiment ultimately failed. Washington was released a month into the 1975 season.

Washington later went into business, starting out with McDonald's franchises, and then got into banking. He founded a hockey team in Ohio and was one of the first African-American owners of a pro hockey team. He is listed as living in Youngstown, Ohio. His daughter left a comment on my post at NOC, saying that her father would sign if I could find an address. Unfortunately, any address I've been able to come up with has not been correct. 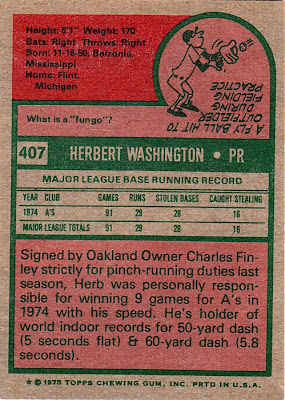 Back facts: This might be the greatest card back in history. I could stare at it for a very long time. The stat line is most unusual, and I guarantee you've never seen "Major League Base Running Record" before.

Other blog stuff: Unfortunately, I have to take another brief break on the blog. See you in a few days.
Posted by night owl at 3:03 AM

This is definitely one of the most interesting cards I've seen.

Was his daughter testing you to see if you could find his address? It's like a game. She didn't give you the correct address?

That is greatness...front and back.

This was always one of my favorite cards from 1975.

Herb was the only one not to play in the field, but Allan "The Panamanian Express" Lewis, Don Hopkins, Matt Alexander and Larry Lintz all were mostly pinch runners.

You know, if you had a fast player that could play defense and bunt - then I could see this working in the days of 10 man staffs. Now, no way.

They didn't even bother to let him wear a helmet (not that he even owned one).

Poor Herb...maybe he wouldn't have been thrown out so much if he'd been watching the pitcher instead of the batter.

I got Herb to sign thru the mail recently. It took a while to get my card back, but he did sign. It looks AWESOMER autographed!

I am out of town thru this week, but shoot me an email if I forget to send you his address.

Wow, great card, front and back. A few oddities: His stats on the card back don't match the Baseball Reference data. His stats show in to have 29 stolen bases in 92 games, not 28 in 91. And if he has 29 runs scored and 29 stolen bases in 1974, then that's just about a guaranteed run if he stole a base.

Helmet or not, the size of the crowds back then could have resulted in the same number of empty seats down the line. I remember some games there where foul balls would get lost in the empty seats, only to have some kids find them a half-inning later.

I was so young at the time that I had very few 75T that I actually pulled from packs. This was one. I remember having to ask my mom what position he played, and then for clarification as to what exactly a pinch runner was.