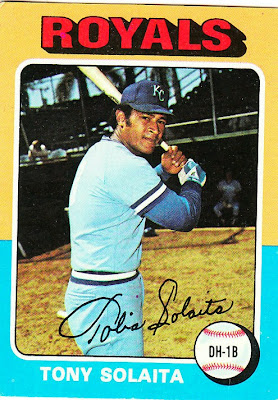 What I thought about this card then: I never saw it. I did pull his 1978 Topps card and knew at an early age that he was the first and only major league player to be born in American Somoa.

What I think about this card now: What is that ghostly Royals figure in the dugout doing?

Other stuff: Solaita was known as a terrific and powerful hitter in the minor leagues, but didn't get much of a shot in the majors until coming up with Kansas City in 1974. From that point he was mostly a backup first baseman and designated hitter with the Royals, Angels and Blue Jays. He then played in Japan in the early 1980s.

After his career, he returned to American Somoa -- he grew up there as a boy before moving to Hawaii -- and helped revive Little League baseball there.

Solaita was murdered in 1990 in a dispute over a land transaction. 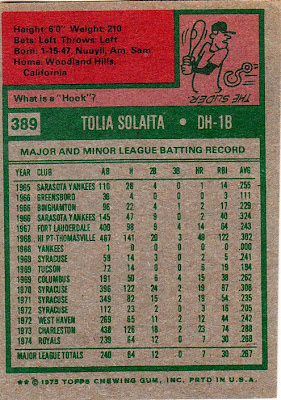 Back fact: Those might be the most lengthy minor league stats in the whole set. Check out that 1968 season in High Point-Thomasville.

Other blog stuff: Johnny Bench was born on this date 63 years ago. He'll always be Mr. Krylon Spray Paint to me.
Posted by night owl at 2:39 AM

For me, I'll always remember Johnny Bench for the "Johnny Bench Batter Up" hitting tool I owned as a kid.

I'm going to remember Johnny Bench for running The Baseball Bunch on TV.

There was a lengthy write up on Tony Solaita's 1990 murder over at SABR's player biographies. It's worth checking out.

no runs, no drips, no errors

Also...the Batter Up was ultra cool. I used it all the time until the kid next door wrecked it. He's an admiral in the navy now.

Happy Belated Birthday Johnny! It looks like the "Royals" name on the jersey in the dugout is glowing. That is a lot of statlines for a guy who had one season in the majors at that point. Just looking at it without reading, it looks like he's a 20 year vet.

Tremendous border combo for the Royals or others pictured in light n
blue uniforms.

Now if you'll excuse me, I'm off to read more about Sloaita's death.