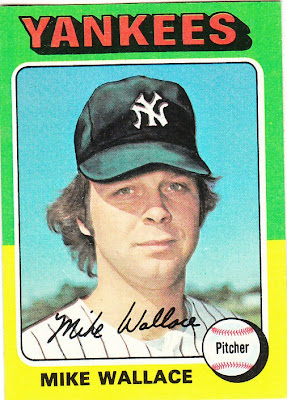 Card fact: This is Mike Wallace's first solo card. Wallace is featured on just two Topps cards by himself (he's on one of those 4-rookie cards in the '74 set). In both of them, he is airbrushed into the cap of his new team. He is airbrushed into a Rangers cap in the 1977 set.

What I thought about this card then: I was deprived as a child. I never saw it. For the longest time, I only knew Mike Wallace as the guy on 60 Minutes.

What I think about this card now: One of the more obvious and terrible airbrushing attempts in the set. The cap is barely on Wallace's head and the N.Y. logo is much, much too big. Wallace's long hair isn't helping matters.

Other stuff: Mike Wallace played five seasons in the majors. He came up with the Phillies in 1973. In his first game, the second part of a doubleheader against the Mets, he threw a complete game, allowing one run, walking none and getting the victory. He worked almost exclusively as a reliever during his career, starting just four games.

In 1974, he was traded to the Yankees and went 6-0 for New York. He remembers teaming with another pitcher on a combined shutout against Jim Palmer and the Orioles during September of that year. After that, he pitched with the Yankees in '75, then with St. Louis and Texas before his major league career ended in 1977. 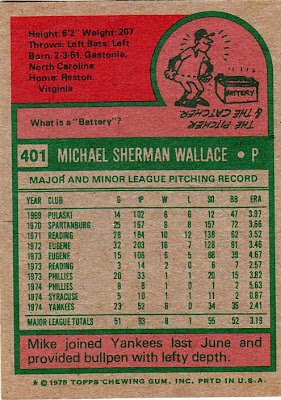 Back facts: The write-up says Wallace "joined the Yankees last June." The trade between the Yankes and Phillies was May 3, which means Topps is saying Wallace joined the Yankees from the minor leagues. He began his New York career with Syracuse, the Triple A team of the Yankees then.

Other blog stuff: Both Cecil Cooper and Oscar Gamble were born on this date in 1949. They're both 61 today.
Posted by night owl at 12:26 AM

I wonder how good Morley Safer's curve is?

So Wallace shuts out the Orioles, and doesn't get another start the rest of the year when the Yanks are swirling the drain? WTF?

I only know this because he was a Phillie, but Wallace is actually in the 1974 set on card #608. And it appears to be a non-airbrushed Phillies logo on his cap on the '74 card, so he's 2 for 3 in that department.

Ab. I recall that card now. Correction made.

Happy Birthdya to Cecil and Oscar.

I believe Wallace became a clubhouse worker for the Rangers after his career.

Good gawd, of the many awful airbrush jobs from the 75 set, I think this takes the cake.

I love the lousy airbrush work in the 75 set. It's a great laugh just to see how badly they can botch the cap logos.