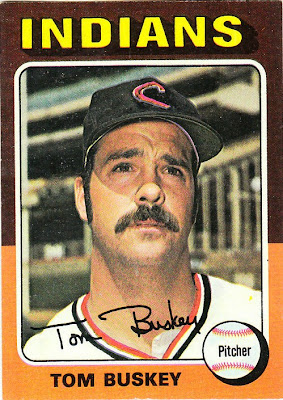 What I think about this card now: Buskey always looks so sad on his baseball cards. I know, I know, he only had like six of them. But he looks sad on most of them.

Also, I believe Buskey is airbrushed into an Indians uniform. He was traded from the Yankees in late April of 1974.

Other stuff: Buskey was a career relief pitcher -- 258 games pitched in eight seasons and not a start among them. He began his career with the Yankees, but came over to the Indians in the famous trade that brought Chris Chambliss and Dick Tidrow to New York.

Buskey proved to be a reliable reliever for the Indians, setting what was then a team record for saves in a season with 17 in 1974. But after a couple of years, Buskey's ineffectiveness won him a trip to the minors. He eventually landed with the fledgling Blue Jays and pitched for them until ending his major league career in 1980.

Buskey died from a heart attack suffered at home at age 51 in 1998. 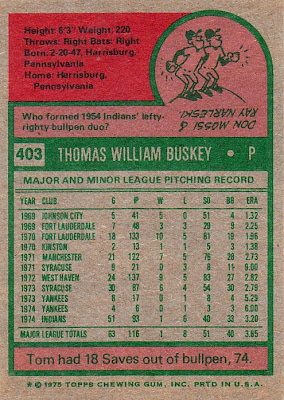 Back facts: One of Buskey's saves in 1974 was for the Yankees before he was traded. Also, Buskey gets a cartoon that is related to his team. Lucky guy.

Other blog stuff: Let's continue the Steve Garvey references for a second straight day. On this date 62 years ago, Garvey was born.
Posted by night owl at 2:47 AM

It's amazing when you think of the people who are reading your blog. It was nice of Buskey's family to contact you and give you the correct info on his death so you have the correct info.