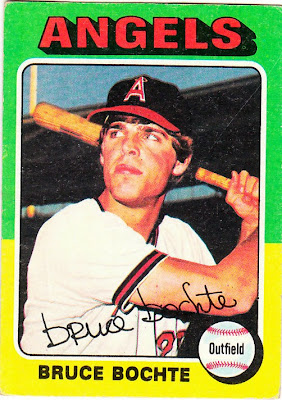 What I thought about this card then: I had the mini card. I didn't like it. I thought Bochte was wearing makeup.

What I think about this card now: Signing your name with a lower-case letter to start your first and last name is a definite attempt to set yourself apart. Either that or Bochte really didn't like the capital letter "B."

Other stuff: Bochte was a good contact hitter for the Angels, Indians, A's and especially the Mariners. His 1979 season with Seattle led to his only All-Star appearance. He drove in 100 runs and hit .316 that year. Bochte played 12 seasons in the majors, finishing up with Oakland in 1986.

After his career, some labeled him as a spacey kind of guy for his thoughts on nature, earth and how human beings fit into the whole thing. It's called cosmology, and there is no way I can explain it sufficiently. This where-are-they-now article about Bochte gives you his thought process better than I could. 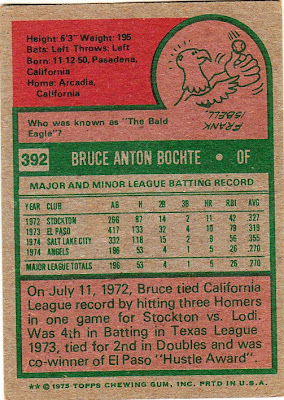 Back facts: Frank Isbell is another old-timey player. He played for the White Sox between 1898-1909.

Other blog stuff: On this date in 1971, the Mets traded Nolan Ryan and three prospects to the Angels for Jim Fregosi.
Posted by night owl at 12:55 AM

I did a brief search, but I couldn't find who was the other "co-winner" of the Hustle Award in 1972. I feel like an internet failure. On the other hand, I unlocked a 1977 Bruce Bochte on the MCG site about 10 minutes ago. Yay me.