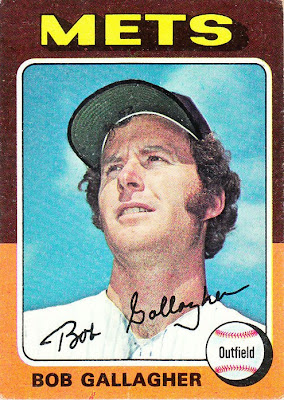 Card fact: This is the final Topps card of Bob Gallagher's career. He had just two Topps cards. The '74 card was the other one.

What I thought about this card then: I vaguely recall seeing this card somewhere and being somewhat unsettled by Gallagher's unruly hair and his stare off into the distance.

What I think about this card now: I was not going to categorize this card as "airbrushed," since the photo angle hides any Astros logo. But I think there is some funny business going on with Gallagher's jersey, so I'm saying it's airbrushed.

Other stuff: Gallagher, whose grandfather played in the majors and managed the Red Sox, played just four years with only 255 at-bats. He came up with the Red Sox, spent most of his time with the Astros, and was traded to the Mets in the Ken Boswell deal  in October 1974. He played just 33 games for the Mets.

I always got Gallagher confused with "Dirty Al" Gallagher, who played around the same time. The non-dirty Gallagher became a high school teacher after his playing career. 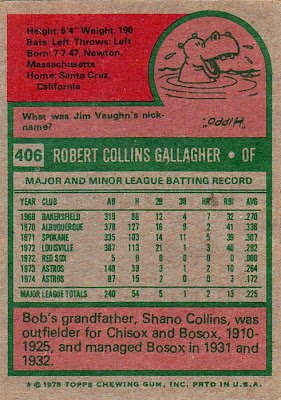 Back facts: Any card that has a cartoon of a hippopotamus on the back rocks.

Other blog stuff: I could say that Carlton Fisk or Ozzie Smith were born on this date. But instead I'm going to say Mario Mendoza was born on this date 60 years ago! The namesake of the Mendoza line has yet to appear on this blog. It's always nice to look forward to something.
Posted by night owl at 3:24 AM

I noticed the Dodger minor league affliates on the back of Gallagher's card (from '69 to '71). After looking him up on baseball reference, I realized that he was another player the Dodgers drafted in their famous 1968 draft.

If it didn't say Mets across the top, that could be a family photo. I hope his only other card was better than that one.