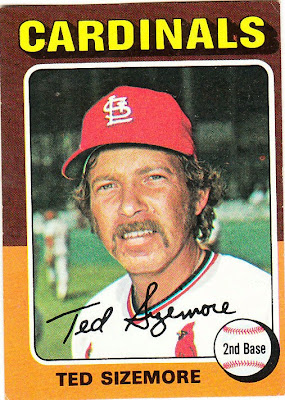 Card fact: This is the first time Ted Sizemore appears on a card with his familiar mustache. He stayed with it until the end of his major league career in 1980.

What I thought about this card then: I liked it a lot. Sizemore was one of my favorites for unknown reasons. He had the fortune of playing virtually his entire career for some of my all-time favorite teams -- the Dodgers, Cardinals, Phillies and Red Sox. There was only one year with the Cubs that fouled things up.

I remember pulling this card from a pack purchased during a trip to the drug store not long after school was let out for the summer. I considered myself very fortunate to have this card.

What I think about this card now: It's quite off-center.

Other stuff: Sizemore came up with the Dodgers and was named the N.L. Rookie of the Year in 1969. But the Dodgers traded him away a year later to get Rich Allen. The trade did clear the way for Davey Lopes to take the second base position with L.A. (only after that experiment with Lee Lacy didn't work out). And the Cardinals had a starting second baseman for five seasons.

St. Louis traded Sizemore back to the Dodgers in 1976 in a deal for Willie Crawford. But he lasted only a year and was off to the Phillies in a deal for Johnny Oates. Sizemore finished out his career with the Cubs and the Red Sox.

After his career, he worked for the Rawlings glove company and is now the president for the Baseball Assistance Team, an MLB organization that provides assistance for former major, minor and Negro league players who are down on their luck. 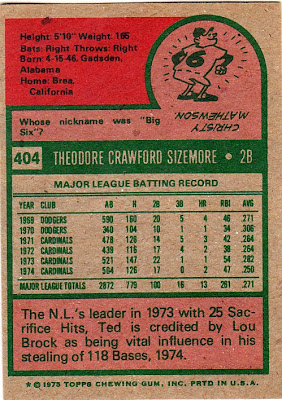 Back facts: Sizemore must have hit second behind Brock a lot in 1974.

Other blog stuff: On this date in 1975, Andy Messersmith and Dave McNally were declared free agents, paving the way for free agency as we know it today.
Posted by night owl at 3:07 AM

Ah, yes, all of those bunts did so much to get the Cards in scoring position. They were 5th in runs scored in 1973, 5th in BA and 5th in OBP. They lost 45 outs with Sizemore's sacs and Bonds' CS.

Sizemore did bat second 135 times, so you're supposition is correct. 10 points.

Any post that mentions Johnny Oates is ok by me. He was one of the nicest baseball people I've ever met.