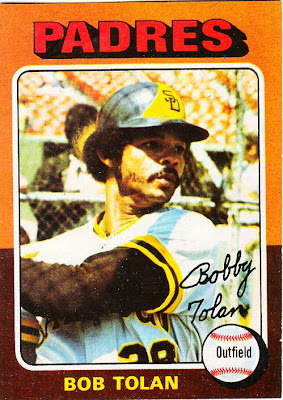 Card fact: Here is another name that does not match the signature on the card. I remember Tolan being called "Bobby," but Topps always referred to him as "Bob" on his cards.

What I thought about this card then: I didn't see it. But no doubt I would have thought it was cool.

What I think about this card now: I can't figure out what that yellow tuft is behind Tolan's hair at the back of his head.

Other stuff: Tolan began  his career with the Cardinals, but blossomed into a full-time outfielder with the early Big Red Machine teams in Cincinnati in the early 1970s. Tolan led the league in stolen bases in 1970 and later was a key figure for the Reds in their NLCS victory over the Pirates, scoring all three runs in a Game 2 victory.

Tolan ruptured his Achilles tendon playing basketball during the offseason and missed the entire 1971 season. He won Comeback of the Year honors with the Reds in 1972. But 1973 began a downward slide for Tolan. His hitting suffered, and he squabbled with management. He left the team without permission and broke team rules by growing a beard. At the end of September he was suspended for the rest of the season and missed the playoffs.

The Reds traded Tolan to the Padres ahead of the 1974 season. Tolan filed a grievance against Cincinnati and won the case, but his hitting wasn't the same. After a couple years with San Diego, he joined the Phillies as a part-time player in '76. He left for Japan after a dismal season between the Phillies and Pirates in 1977. Later Tolan worked as a coach for the Padres.

Tolan's son, Robbie, was a prospect in the Nationals organization. He was shot by a police officer in 2008 during a dispute and the resulting injury may have halted his baseball career. 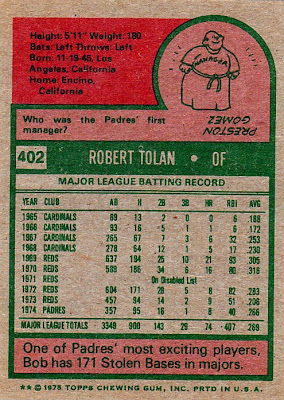 Back facts: As a kid, I thought players were special if the cartoon referred to the team for which he played.

Other blog stuff: On this date in 1982, Steve Garvey signed a contract to play with the Padres, disappointing Dodger fans everywhere. I know someone who changed his favorite team from the Dodgers because of this. I do not understand that decision.
Posted by night owl at 12:31 AM

I'd like to see the Padres play a game in those alternate unis (like the cartoon). It's players like Tolan that Topps should have had the SB category on the cards.

Perhaps the yellow tuft is an attempt to cover up the face of the guy behind the fence.